Size750mL Proof106 (53% ABV)
Only 10 casks of this whiskey, which was made from barley smoked over a Californian peat flame, have ever been produced.
Notify me when this product is back in stock. 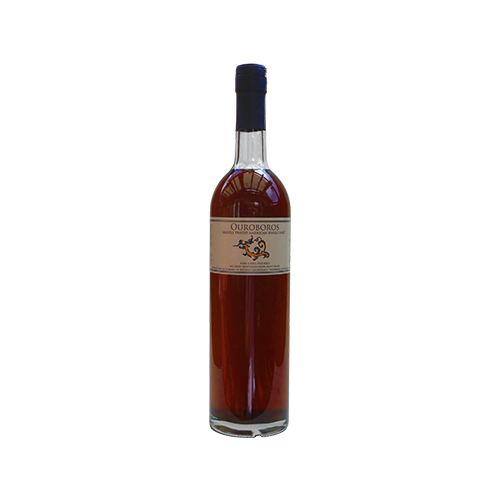 The ancient Egyptians were the first to use the image of an Ouroboros — a symbol that depicts a dragon eating its own tail — to represent the cyclical nature of life. "Ouroboros was also the symbol used by Vlad III of Bulgaria, who was ultimately imprisoned in Hungary," says Bryan Davis, the master distiller at Lost Spirits Distillery. "We posted on our facebook page for people to help us come up with names and got a lot of great ideas from fans. We thought Ouroboros was the perfect name."

"Our peat is sourced from a private island in the delta beneath San Francisco Bay," says Davis. "The peat in the bay is composed of 100% sedge moss, with reeds growing in it." In contrast, the peat used for Leviathan II was composed of spaghnum moss. "It's completely different peat so it's a radical change in that respect." As a result of using peat from California, Ouroboros Whiskey has slightly more consistent and integrated notes of smoke and tangy salt than Levithan II.

After peating and fermenting the grains, Davis distills the wash through his handmade, steam-powered oak still, which, much like a Duracell battery, has a copper top. Since Ouroboros Whiskey is exposed to oak even in the still (the still is located outside, completely exposed to the elements), the whiskey contains nearly double the concentration of furfural — the compound that gives whiskey its cookie-like, baked goods quality — as compared to ordianry whiskies.

Following distillation, Ouroboros Whiskey is aged in casks made of Hungarian oak that were previously used to mature chardonnay and then sherry. "The casks originally contained chardonnay from Napa Valley," says Davis. "We emptied them, cleaned them out, re-charred them, re-cooped them, filled them with sherry, pressurized them, emptied the sherry and then filled the casks with Ouroboros." In addition, unlike traditional distilleries that fill casks entirely, Davis only half-filled the Hungarian oak casks. "This way, some of the spirit evaporates while aging and floats up to the top and then falls back down — essentially doubling the surface area exposure of the whiskey to the wood," says Davis. "And it also gives the spirit more breathing space."

Ouroboros Whiskey has subtle but ever-present undertones of sherry and peat throughout. The initial notes of maple syrup and dark cherries give way to hints of roasted nuts and a smooth, sweet yet smoky finish.

Only ten casks filled with Ouroboros Whiskey — or 1,500 bottles — have been released.

Pick yours up today!

Subtle but ever-present undertones of sherry and peat throughout. Initial notes of maple syrup and dark cherries give way to hints of roasted nuts and a smooth, sweet yet smoky finish.