Size750mL Proof90.5 (45.25% ABV)
The fifth expression of Diageo's Orphan Barrel line, Forged Oak is aged for 15 years.
Notify me when this product is back in stock. 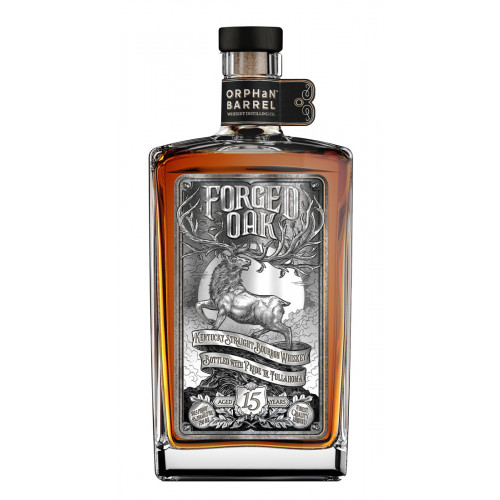 In 2013 bourbon and Tennessee whiskey were labeled the fastest growing product category by volume in the U.S. alcohol business. The Orphan bottling project was more or less an ingenious response to this boom in the whiskey industry, and an effort to accommodate the vast quantities of leftover product from their monopoly of acquisitions.

When Diageo didn't have a place for the acquired product in their blends, they set the spirits aside. Time transformed this new spirit into aged delicacies. In 2013, Orphan Barrel Whiskey was created by Diageo, commercializing a large stock of ultra-aged American whiskeys that it had been maturing at the Stitzel-Weller distillery in Shively Kentucky.

The fifth expression of Diageo's Orphan Barrel line, Forged Oak is crafted from a mashbill of 86% corn, 7% barley, and 6% rye and aged for 15 years. “ A statuesque whiskey with aromas of cedar, maple and vanilla bean that give way to seasoned woody notes of cocoa and young berries, ultimately leading to a long, dry finish of black pepper” (producer).

Forged Oak features aromas of cedar, maple and vanilla bean. Notes on the palate include seasoned wood, cocoa and berries. The finish is long, dry and peppery.