Size750mL Proof80 (40% ABV)
Made in Connecticut, this moonshine is distilled by the nephew of a Prohibition-era speakeasy owner.
Notify me when this product is back in stock. 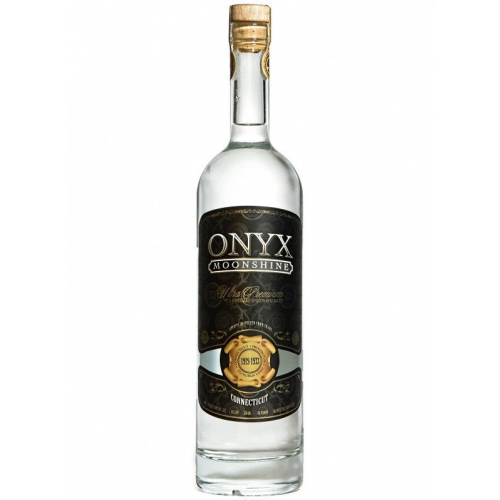 Working from the historic Hilliard Mills in Manchester, master distillers Adam von Gootkin and Peter Kowalczyk have rekindled the legacy of Connecticut moonshine. Not often thought of as a traditional moonshine hotspot, Connecticut was actually one of only two states that failed to fully pass the Eighteenth Amendment, which introduced Prohibition to the United States. Once Prohibition began, however, hidden speakeasies peppered the state -- von Gootkin's own great uncle purportedly operated a speakeasy during Prohibition.

With an authentic Prohibition-era moonshine recipe, von Gootkin and Kowalczyk handcraft Onyx Moonshine in small batches using only the finest ingredients and freshly drawn Connecticut spring water. Although they refuse to reveal their secret recipe, we can tell you that the moonshine contains corn, malted barley and several other grains. At 80 proof, Onyx Moonshine is both smooth and tasty, and lacks the burn of traditional moonshines. Full-bodied, it has notes of honey and apple on the nose that contrast wonderfully with spicy wood undertones before giving way to a refreshing hint of botanicals.

Until now, Onyx Moonshine has been available only in Connecticut. That's not to say it has gone unnoticed by the rest of the country -- Onyx was chosen as the "Best Microdistillery in New England" by Yankee Magazine in 2012. Onyx Moonshine was also selected as the official spirit of the 2011 Country Music Awards and the 2012 Grammy Awards and was given to each performer and presenter in gift bags.

Help carry on the legacy of Connecticut moonshine and try a bottle today!

Smooth and soft, with an aroma of honey and apples. Refreshing botanical flavors cut through this full-bodied moonshine. Sips like a light bourbon on the nose, with a malty Scotch-like finish.