Be the first to review this product
This 40-proof flavored moonshine is an apple pie in a jar. Meant to evoke memories of Granny Sue's famous pies, it's a creamy and fruity delight that mixes particularly well.
Add to Wish List
Notify me when this product is back in stock.

The Story of Grandaddy Mimm's Moonshine starts with Jack "Mimm" McClure, a moonshiner and philanthropist who was known far and wide for his charitable spirit and bootlegging escapades. He started distilling in the 1930s. "Jack McClure was the John Wayne of our section. A bear like man who weighed about 250 pounds, he wore a Stetson hat, and his shirt was always, even in winter, unbuttoned with a mat of reddish-gray hair exposed. He was loved, hated, respected, and feared, depending upon the experience one had had with him," said Gov. Zell Miller of the man.

He was given the nickname "Grandaddy Mimm" by his grandchildren, one of which being the prolific country musician Tommy Townsend of Waymore's Outlaws fame. In 2012 Townsend took it upon himself to resurrect his grandfather's moonshine using the original recipes and two stills designed by McClure and made in Georgia. The family-run operation uses locally-sourced ingredients. The lineup now consists of several expressions ranging from their flagship, the original Authentic Corn Whiskey, to Peach, Apple, Cherry, Blackberry, and a 140-proof monster, Mule Kickin' 140. Each expression comes in a homely yet old-school stylish mason jar.

Grandaddy Mimm's Apple Brown Betty Moonshine is a tamed-down 40-proof flavored Moonshine that pays tribute to Granny Sue's pies. Mimm's wife used was just as famous for her baked goods as her husband was for his moonshine. Made to taste like an apple pie in a jar of moonshine, it's a creamy and fruity delight that goes well with ice cream or any number of mixed drinks. 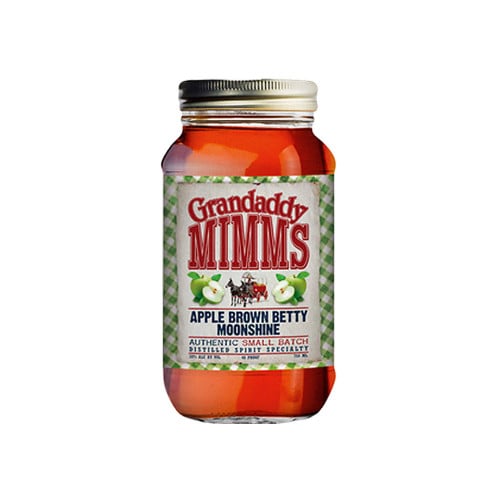