Size750mL Proof80 (40% ABV)
Based in Tumwater, Washington, Olympia relies on artesian water drawn by hand from deep underground. The mineral-rich and contaminant-free water is used in both distilling and blending, making for a smooth and pure vodka with a distinct mouthfeel.
Notify me when this product is back in stock. 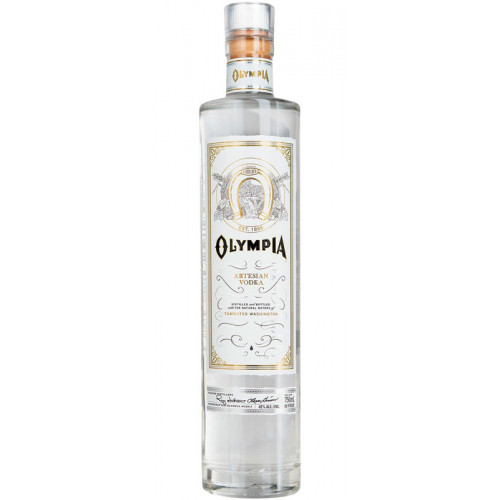 Leopold Schmidt was born in 1846 in Germany. Equal parts adventurer and brewing enthusiast, Schmidt trained as a brewmaster in Germany, eventually arriving in America. In 1896 he founded the Capital Brewing Company, the predecessor of Olympia Brewing Company. Olympia Beer has transferred its brewing operation from Tumwater, Washington, 2 decades ago.

The brand has recently returned to Tumwater in the shape of Olympia Distilling Co. ― the distillery that produces Olympia Artesian Vodka. "We know how historically important the brewing of Olympia beer has been to this town. To be able to now distill Olympia Artesian Vodka here in Tumwater, and produce a product and facility that we, and the community can be proud of, has been an incredible experience," said Ray Watson, one of Olympia's Master Distillers.

Crafted and bottled locally, the vodka owns its smoothness, purity, mouthfeel, and flavor to natural artesian water that is hand-drawn by Olympia's Master Distillers Ray Watson and Lesa Givens from an artesian well that lies deep underground. Artesian water is known for being contaminant-free and rich in minerals and electrolytes, meaning that it lends itself well to distilling and blending. When 60% of the finished spirit is water, it's natural that the quality of the water needs to be of the highest quality. Recognizing the importance of pure water, Olympia donates a portion of profits to charities that work to protect waters around the globe as well as the Pacific Northwest. Its smoothness and purity have garnered several awards, including gold medals at the SIP Awards in 2021 and at the Bartender Spirits Awards in 2020. The vodka is bottled at 80 proof.

Get your bottle of this premium artesian vodka today!

It's a pure and balanced vodka with a distinct smoothness, mouthfeel, and minerality to it, as well as just a touch of citrus. The finish is crisp and fresh with a hint of spice.