Size750mL Proof80 (40% ABV)
Made from fresh corn and filtered Brooklyn tap water, this vodka is handcrafted by emigres from Eastern Europe.
Notify me when this product is back in stock. 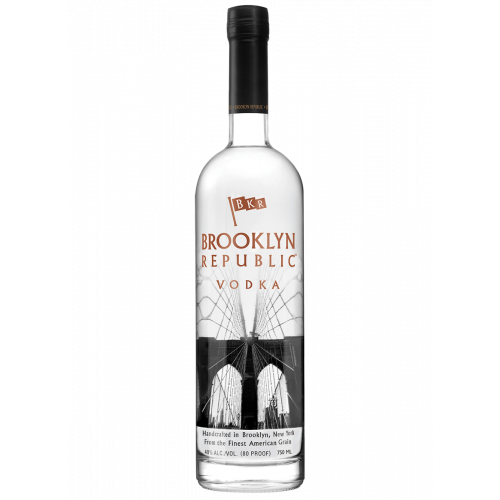 Each batch of Brooklyn Republic Vodka is purified and perfected by cold-filtering it through active carbon at sub-zero temperatures multiple times. After about a week of filtering and testing cycles, the vodka is bottled and corked by hand at Shokin's facility near the Brooklyn Navy Yard.

With zero additives, Brooklyn Republic Vodka is a pure, well-balanced vodka. The slight sweetness of corn and Brooklyn tap water leaves a medium body with an ultra-smooth finish.

Conceived in Latvia, born in Missouri, and raised in New York, Brooklyn Republic Vodka is one of the smoothest vodkas in the world. The brainchild of Latvian expatriate Gary Shokin and his daughter Kary Laskin, Brooklyn Republic Vodka grew out of Shokin's hobby of collecting — and, of course, sampling — vodka from all over the world. "My father has been a connoisseur of vodka all of his adult life and has amassed a collection of hundreds of different vodkas from all over the world," says Laskin. "We know from experience what good vodka is, so it was an easy and passion-fueled decision to start making it."

Brooklyn Republic Vodka starts in Missouri, where it's distilled from locally grown corn and New York wheat in a unique six-column still. Then, its shipped to Brooklyn where the grain spirits are blended together with Brooklyn tap water — the same water that many argue makes Brooklyn pizza and bagels inimitable. "People laugh when we say Brooklyn water, but it really makes a difference," says Laskin.

Medium-bodied, this vodka is slightly sweet and has a smooth finish.