Size750mL Proof80 (40% ABV)
F. Paul Pacult called it the only flavored vodka for Bloody Marys from this day forward in the Pacult-Woodley home bar.
Notify me when this product is back in stock. 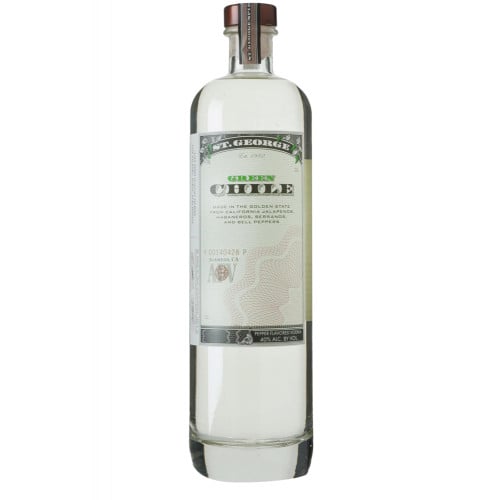 Winters, who is widely-known for experimenting with different types of spirits, has a laboratory dominated by a 10-liter test still in addition to the glass beakers and graduated cylinders that cover every inch of counter space. Next to the dusty chalkboards caked with equations for the conversion of sugar to alcohol and intricate diagrams of molecular structures are bottles of experimental whiskeys, vodkas and even an aging balsamic vinegar (it's 14 years old already).

This striking Green Chile Vodka is crafted from a variety of California-grown hot and sweet peppers (jalapenos, Serranos, habaneros, red and yellow bell peppers) that build layers of sweet, savory heat. Lime peel and fresh cilantro are added to impart even more vibrancy and depth of flavor.

The bold vodka is elaborately distilled using a 1,500-liter still, filled with crushed jalapeno peppers, lime peel, and a non-GMO base spirit.This mixture is then distilled through a Carter head assembly layered with fresh cilantro. Serrano, habanero, red and yellow sweet bell peppers are infused separately, then each infusion is blended with the jalapeño lime distillate, giving the vodka its distinctive green hue. Sure to add a kick to any cocktail, this is the “salsa fresca” of spirits.

The chile flavor is fresh, sweet, and bright—with just enough capsicum punch to make sure that you know we crushed tens of thousands of pounds of green jalapenos to make it. Layers of spicy chiles, citrus and zesty cilantro aromas on the nose. The palate is very salsa-like with peppery heat followed by a clean, subtly sweet, spicy finish.