Size750mL Proof80 (40% ABV)
Olmeca Altos Tequila Reposado is aged for six to eight months in white oak casks previously used to mature bourbon and earned a gold medal three times over at the San Francisco World Spirits Competition.
Notify me when this product is back in stock. 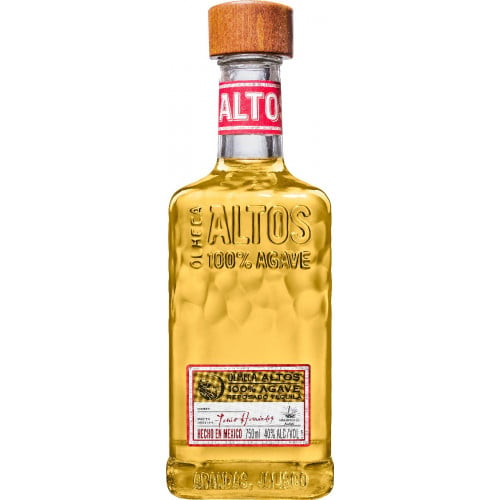 Internationally renowned British bartenders Henry Besant and Dre Masso were on a quest to create a tequila diverse enough for bartenders to use in cocktails, and excellent enough to compete with (and surpass!) high-end bottles when drinking neat. They teamed up with Jalisco native Jesús Hernandez, who has spent seventeen years perfecting the art of tequila as Maestro at the Destilería Colonial de Jalisco in Los Altos. Hernandez manages every level of production, starting with 100% blue agave planted in ideal growing conditions at 2,100 meters above sea level in mineral-rich volcanic soil. After seven to eight years, the plants are finally ready to be hand-harvested by jimadors.

Unlike grapes or wheat, agave plants take nearly a decade to mature, so the soil and growing conditions have a strong impact on the final product. Destilería Colonial de Jalisco employs an entirely full-time, multi-generational, team of jimadors who have passed down the art of agave harvesting for decades. After selecting only the best plants for processing, the agave is roasted in the distillery’s own brick ovens for up to three days, before resting in order to retain as much juice as possible for the tequila.

After relaxing for a bit, half of the agave is shredded and pressed via a roller mill, while the rest is crushed using a two-ton Tahona Stone. Tahona rolling is a 500-year old method used almost exclusively for the finest tequila. The agave juice ferments for 36 hours and is then distilled in small batches using copper stills.

Olmeca Altos Tequila Reposado is aged for six to eight months in white oak casks previously used to mature bourbon. It’s approachably sweet, fruity, and fresh on the nose, while maintaining the aroma of cooked agave. Vanilla and woody notes from the barrels lead to a smooth and bourbon sweet palate, which emerges to reveal a citrusy finish. In 2015, Olmeca Altos Reposado was awarded the gold medal three times over at at the San Francisco World Spirits Competition.

Approachably sweet, fruity, and fresh on the nose, while maintaining the aroma of cooked agave. Vanilla and woody notes from the barrels lead to a smooth and bourbon sweet palate, which emerges to reveal a citrusy finish.