Size750mL Proof60 (30% ABV)
A flavored whiskey for special occasions or great cocktails, this spirit is bottled at 60 proof and has a decadent profile with prominent caramel throughout and a salty finish.
Notify me when this product is back in stock. 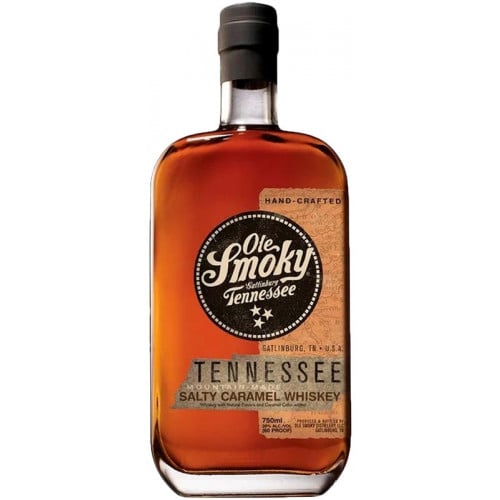 2009 was the year the State of Tennessee decided to change its laws, allowing the making of moonshine for the very first time in over a century. Ole Smoky was co-founded by Joe Baker in Tennessee, and the brand has created a broad range of flavored Moonshine and more than a dozen Whiskeys, as well as canned ready-to-drink cocktails.

Touting themselves as Appalachian born and bred, the Ole Smoky family was among the first to step foot in the Smoky Mountains. They craft their whiskeys using time-honored traditions of whiskey making. Quickly following Tennessee’s change in state law which permitted the distillation of spirits, Baker got to work crafting one of a kind, mountain-made moonshine, making Ole Smoky the first federally-licensed distillery in the history of East Tennessee.

Their whiskey lineup includes Mango Habanero, Cinnamon, Root Beer, Peach, Peanut Butter, Vanilla Bean, Cookies & Cream, and several other expressions. The Ole Smoky Salty Caramel Whiskey does as its name implies, bringing an intense and rich caramel flavor with a hint of salt on the finish. Bottled at 60 proof, it's a great situational drink (think Halloween!) that works great in cocktails as well.

It's a sweet profile with prominent notes of caramel and a distinct saltiness on the finish. The whiskey underneath still shines through with caramel, vanilla, and apple notes, as well as a hint of spice.