Caskers Rewards members earn up to 5 store points back when buying this bottle.
Size750mL Proof100 (50% ABV)
Old Malt Cask Glenrothes 2005 is a truly rare find. Every drop of this fine Speyside Single Malt has been drawn from a single ex-Sherry casks, yielding a scant 577 bottles for the world to share.
Notify me when this product is back in stock. 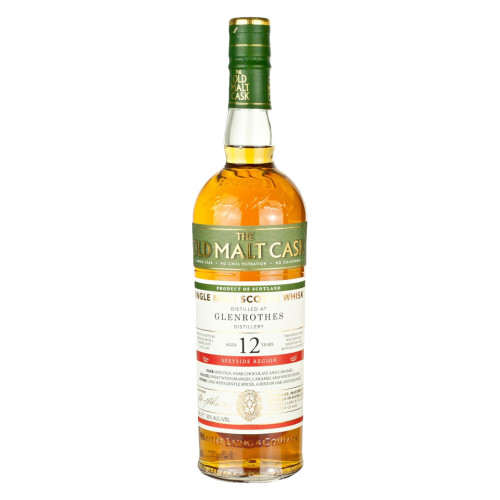 Independent bottler Hunter Laing & Company is has been trading in Single malt and Scotch Whisky for generations. And they have a serious knack for finding rare casks of Whisky and issuing special, limited release bottlings that preserve all the character of the spirit in unadulterated glory. And they do it really well. They have issued a few custom blends under their own brand name, but they specialize in single cask releases of exceptional Single Malts. And if you are a fan of Scottish Single Malt Whisky in its purest state, you are a fan of Hunter Laing’s work.

In 1879 the Glenrothes Distillery was founded James Stewart near the Burn of Rothes in Speyside. James also worked at the nearby Macallan Distillery, and he brought the knowledge he gained there to his new venture. The distillery itself is owned by The Edrington Group, but the Glenrothes Single Malt Whiskey produced there is owned by Berry Bros. & Rudd in an odd cooperative arrangement. What’s not bottled as Glenrothes Single Malt is in high demand as a core component of various blends, including Cutty Sark and The Famous Grouse.

Old Malt Cask Glenrothes 2005 is a fabulous example of their craft. This delicious bottling is drawn from a single cask of Glenrothes Single Malt aged for twelve years in a ex-Sherry Butt, yielding a grand total of 577 bottles. That it, there shall never be any more. and since it is bottled and nearly full cask strength — 59.2% ABV — the few lucky enough to have a sample of this rare dram will be able to tasted every nuances, savory drop.

The flavors are subtle and powerful at the same time. The combination notes of raisins, nuts, honey, dried berries, and cobble strike a decidedly “Christmas Fruit Cake” combination in all the best senses of the words. And since it is truly a single cask release, there will only ever be 577 bottles… no more.