Size750mL Proof80 (40% ABV)
This Presidential inspired Black Label bourbon earned 93 points at the 2015 Ultimate Spirits Challenge, as well as a Gold medal at the 2015 San Francisco World Spirits Competition.
Notify me when this product is back in stock. 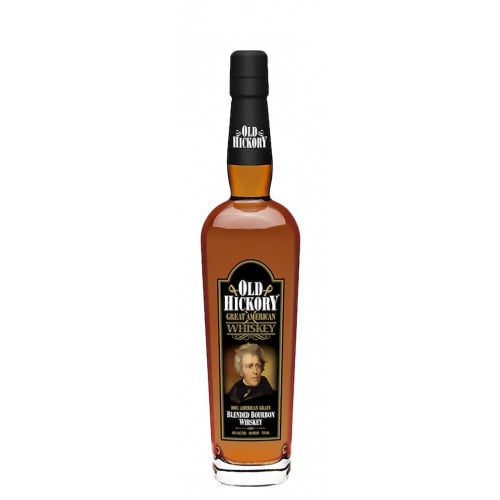 Old Hickory Great American Bourbon is inspired by the General, Statesmen, and seventh President of the United States, Andrew Jackson. Jackson, a professed connoisseur of bourbon, made his own blends at his plantation home.

Old Hickory Great American Bourbon Whiskey is made from a proprietary blend of the distillery’s very own stock, made from a unique mash bill by longtime Seagram's master blender, Pam Soule. The whiskeys are handcrafted from water drawn from deep, rechargeable ancient glacial aquifers dating back 1.2 million years. IT is these acquires that formed the Ohio River basin as it is today. Produced at the historic Joseph E. Seagram's facility in Lawrenceburg, IN, all of the corn used for production is sourced from farms within a 250-mile radius of the distillery.

Old Hickory Black Label is a pleasant bourbon, bright and spicy with compelling aromas of cherry custard, almond nougat, and pistachio gelato. The palate is silky and full-bodied with a tingling mouthfeel, followed by an engaging finish of subtle white toffee, cherry, and sweet notes. This Old Hickory bourbon earned 93 points at the 2015 Ultimate Spirits Challenge and a Gold medal at the 2015 San Francisco World Spirits Competition.

Bright and spicy notes, inviting aromas of cherry, almond nougat, and pistachio ice cream. The palate is smooth and full-bodied followed by a compelling finish with lingering notes of toffee, dried fruits, and honey.