$42.99
Caskers Rewards members earn up to 2 store points back when buying this bottle.

Size1L Proof60 (30% ABV)
This ready-to-drink cocktail was the official drink of the 141st Kentucky Derby, served to patrons of Churchill Downs and now available on Caskers!
Notify me when this product is back in stock. 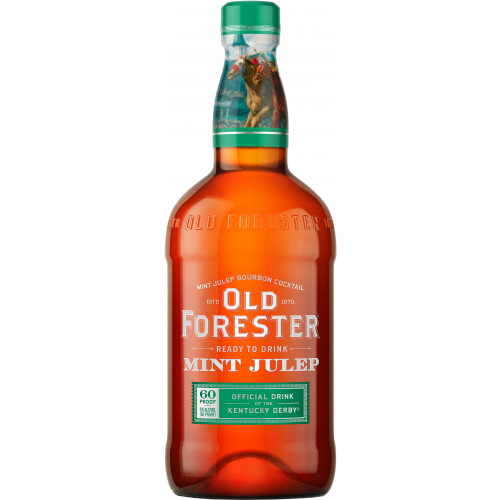 Old Forester Kentucky Straight Bourbon touts itself as the first bourbon ever bottled. The bourbon is made from a mash of corn, rye and malted barley — after the grains have been milled and mashed, they are fermented for five to seven days with a proprietary yeast strain that is grown fresh daily at the distillery. This extra-long fermentation process ensures that the bourbon has an unparalleled depth and complexity. Following fermentation, the grains are twice distilled before being matured in new, American oak casks.

Old Forester Mint Julep is a ready-to-drink cocktail made with Old Forester, mint, sugar and water, as well as other ingredients. Old Forester Mint Julep — which comes in a one-liter bottle — was the official drink of the 141st Kentucky Derby, and was served to patrons of Churchill Downs who came to watch American Pharoah win the first leg of the Triple Crown. Although Old Forester was established in 1860 and the Kentucky Derby in 1865, this collaboration represents the first time the two legendary organizations have officially partnered, and the result is an outstanding, convenient take on Kentucky’s most famous cocktail.

Pick up a bottle (or two) today!

Authentic nose of freshly cut mint, which continues on the palate along with notes of peaches and apple candy. The finish is sweet but not overly so, with a light hint of caramel and raisins.