Size750mL Proof86 (43% ABV)
This bourbon, which was the first-ever bottled bourbon, earned a score of 95 points at the 2015 Ultimate Spirits Challenge.
Notify me when this product is back in stock. 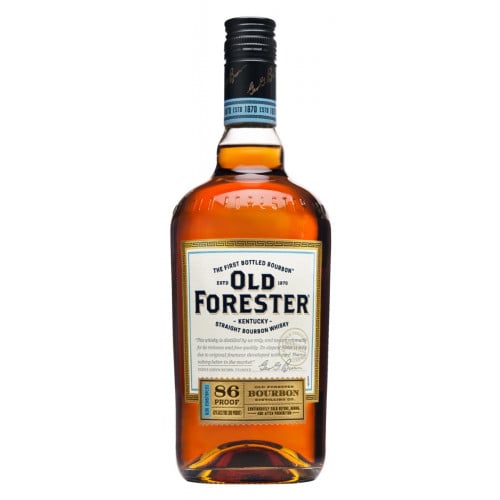 Old Forester Classic Kentucky Straight Bourbon touts itself as the first bourbon ever bottled. The bourbon is made from a mash of corn, rye and malted barley — after the grains have been milled and mashed, they are fermented for five to seven days with a proprietary yeast strain that is grown fresh daily at the distillery. This extra-long fermentation process ensures that the bourbon has an unparalleled depth and complexity. Following fermentation, the grains are twice distilled before being matured in new, American oak casks.

Old Forester Classic Kentucky Straight Bourbon has a sharp, sweet aroma filled with vanilla, tobacco, mint and an underlying oak character. The palate is a bit spicier, with initial caramel notes leading to flavors of toast and breakfast cereal. The finish is long and dry, with more oak and some light citrus flavors, including orange peel, bitter apple and pear.

Sharp, sweet aroma filled with vanilla, tobacco, mint and an underlying oak character. The palate is a bit spicier, with initial caramel notes leading to flavors of toast and breakfast cereal. Finish is long and dry, with more oak and some light citrus flavors, including orange peel, bitter apple and pear.