Size750mL Proof98 (49% ABV)
Aged for twelve years, this bourbon earned a score of 94 points at the Ultimate Spirits Challenge.
Notify me when this product is back in stock. 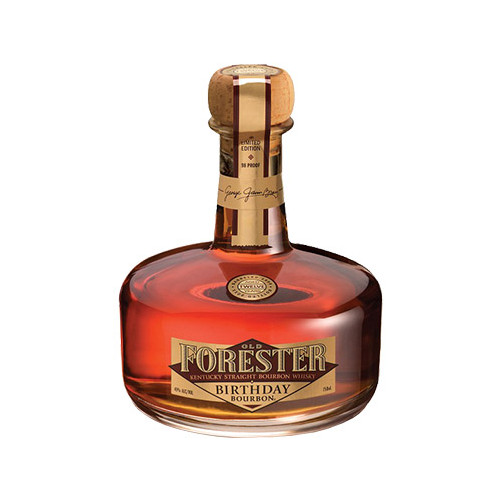 Old Forester Birthday Bourbon is made from a mash of corn, rye and malted barley. After the grains have been milled and mashed, they are fermented for five to seven days with a proprietary yeast strain that is grown fresh daily at the distillery. This extra-long fermentation process ensures that the bourbon has an unparalleled depth and complexity. Following fermentation, the grains are twice distilled before being matured in new, American oak casks for twelve years.

Old Forester Birthday Bourbon honors the birthday of George Brown, who was born on September 2. The bourbon is crafted from whiskey distilled on a single day of production and hand-selected by Master Distiller Chris Morris. In addition, since the limited-edition bourbon is vintage-dated, it can never be replicated.

Old Forester Birthday Bourbon (2011 Release) has a bold and complex aroma of citrus, dried fruits, brown sugar and roasted nuts. The aroma gives way to notes of silky fruits, caramel, and vanilla on the palate, and finishes with touches of allspice, cinnamon and oak. The bourbon earned a score of 94 points at the Ultimate Spirits Challenge in 2011.

We have only a limited number of bottles available. Pick one up today!

Bold and complex aroma of citrus, dried fruits, brown sugar and roasted nuts. Notes of silky fruits, caramel, and vanilla on the palate. Finishes with touches of allspice, cinnamon and oak.