Size750mL Proof101 (50.5% ABV)
This 2018 batch of Old Forester Birthday Bourbon was released on September 2, honoring the birthday of George Garvin Brown, the founder of Old Forester.
Notify me when this product is back in stock. 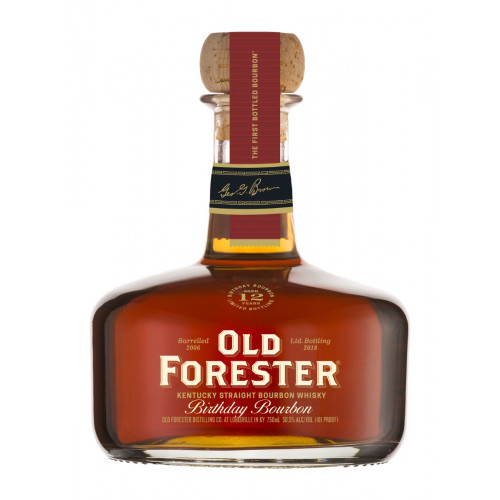 This 2018 batch of Old Forester Birthday Bourbon was released on September 2, in honor of George Garvin Brown’s birthday, the founder of Old Forester. Like previous batches, this whiskey is aged just 12 years. The whiskey comes from two lots of barrels distilled on June 9, 2006, and matured in Warehouses I and J. This is the first Birthday Bourbon to be bottled at the new Old Forester Distillery on Louisville’s Whiskey Row.

Sweet berries, toffee, brown sugar, and oak followed by a hint of spice. The palate is ripe with notes of dark fruits vanilla, rye, baking spice and chocolate followed by a subtle oakiness. The finish is lingering, complex and bold with notes of caramel, subtle oak, tobacco, crisp greens, and rye spice.