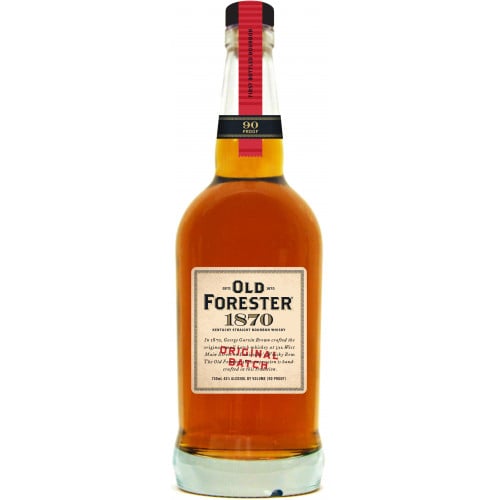 Old Forester 1870 Original Batch Kentucky Straight Bourbon Whiskey is the first release in Old Forester’s Whiskey Row Series, which aims to “highlight the distillery’s significant milestones and production innovations” throughout its nearly 150 year history. The whiskey is named for another practice pioneered by George Garvin Brown — batch distillation. Brown was the first to batch together bourbons from multiple distilleries in order to ensure consistency of flavor. In homage to Brown’s pioneering spirit, Old Forester 1870 Original Batch Kentucky Straight Bourbon Whiskey is made by batching together bourbons from various warehouses at the distillery, creating a final product that is greater than the sum of its parts.

Old Forester 1870 Original Batch Kentucky Straight Bourbon Whiskey has a lively aroma of caramel apple, vanilla bean and oak, which leads to a palate filled with leather, tobacco and vibrant spices including cinnamon and ginger. The finish is dry and smooth, with notes of oak, candybar and more baking spices.

Pick up an original bourbon which has influenced countless others today!

Lively aroma of caramel apple, vanilla bean and oak, which leads to a palate filled with leather, tobacco and vibrant spices including cinnamon and ginger. The finish is dry and smooth, with notes of oak, candybar and more baking spices.