Size750mL Proof125.6 (62.8% ABV)
A small batch release to celebrate the the 150th anniversary of George Garvin Brown selling the first bottled bourbon. Bottled at 62.8% ABV, this is the richest and fruitiest of the three batches. A delicacy for all the whiskey geeks.
Notify me when this product is back in stock. 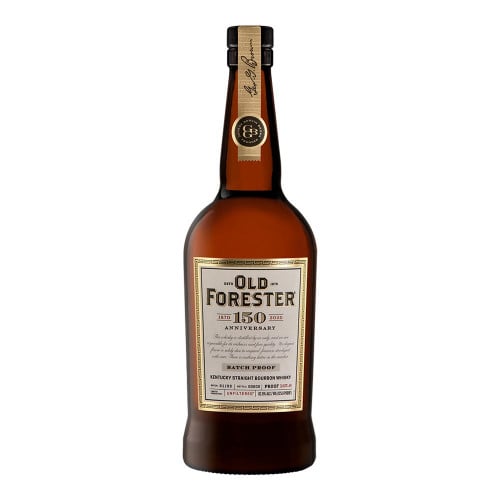 In the 19th century, most distilleries in the United States weren’t aging their whiskey but bottling it straight off the stills. In 1870, a young pharmaceuticals salesman from Kentucky George Garvin Brown opened the doors to J.T.S. Brown & Bro. to begin distilling bourbon with his brother. Unlike other distilleries at the time, Brown aged his bourbon, named Old Forester, in oak casks. Touting themselves as a brand of firsts, Old Forester is responsible for numerous milestones in the history of whiskey: the first bourbon to be bottled exclusively in sealed glass bottles (rather than barrels as was the custom), the first double barreled bourbon, the first bourbon to create a decanter, the first single barrel bourbon in the industry. Old Forester was also the only bourbon that was continually sold by the same company before, during and after prohibition.

In 2020, Old Forester 150th Anniversary Bourbon Batch 01 was released to celebrate the 150th anniversary of George Garvin Brown selling the first bottled bourbon in 1870. Master Distiller Chris Morris selected 150 barrels for bottling and Master Taster Jackie Zykan headed the tasting group that batched three bourbons, released in three small batches. Each of them unfiltered and bottled at batch strength, Batch 01 consists of 46 barrels and it’s bottled at 62.8% ABV. The richest and fruitiest of the three batches, Batch 01 is packed with dark flavors on the nose and on the palate alike – expect aromas of dark brown sugar and fruit scents as well as flavors of rich, deep caramel mingling with char and smoke. This is a delicacy for the whiskey geeks out there.

The nose greets with dark aromas of brown sugar, chocolate and fruits like black cherry. The palate is rich and syrupy with notes of deep caramel, char and smoke. The finish is long and pleasant.