Be the first to review this product
This Old Ezra 101 proof bourbon is crafted from a recipe that is seven generations old.
$96.99
Add to Wish List

The Old Ezra brand is owned by St. Louis, Missouri-based, family-owned Luxco. The bourbon is currently distilled by Heaven Hill, made using a seven generations old recipe. The Kentucky straight bourbon whiskey is distilled from a base of sour mash and charcoal filtered following distillation. The spirit is then aged for seven years in new, charred white oak barrels.

This Old Ezra release, though it carries a slightly different name, is a product of Ezra Bourbon’s standard rye mash bourbon line. Bottled by Luxco at 101 proof, expect notes of caramel and vanilla, with a considerable amount of oak and charcoal followed by fruits and nutty flavors. The burn reflects the proof near the end of the palate. The finish is long with nuanced notes and oaky flavors.

Notes of caramel and vanilla on the nose, with a great amount of oak and charcoal followed by fruits and nutty flavors ending with a slight burn on the back palate. The finish is long with nuanced notes and oaky flavors. 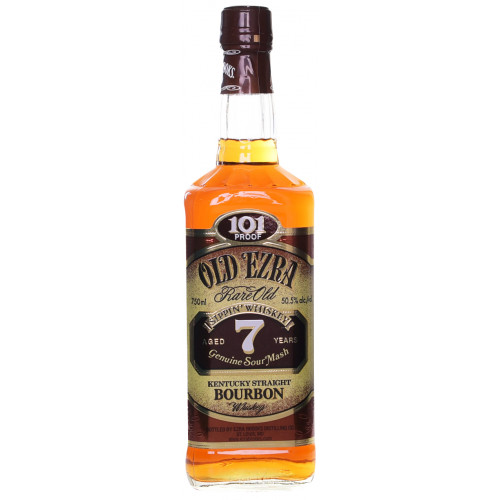