This product is available in: CA, KY, NE, NH, ND Unfortunately, we can't ship to PO Boxes and APO addresses.

Size750mL Proof95 (47.5% ABV)
With Off Hours, founder Jake Ireland aims to challenge the stereotypes surrounding bourbon. His "modern classic" approach includes being upfront about the source ― it's a 5-year-old MGP whiskey with a mash bill of 75% corn, 21% rye, and 4% malted barley that's bottled at 95 proof.
Notify me when this product is back in stock.

This product is available in: CA, KY, NE, NH, ND Unfortunately, we can't ship to PO Boxes and APO addresses. 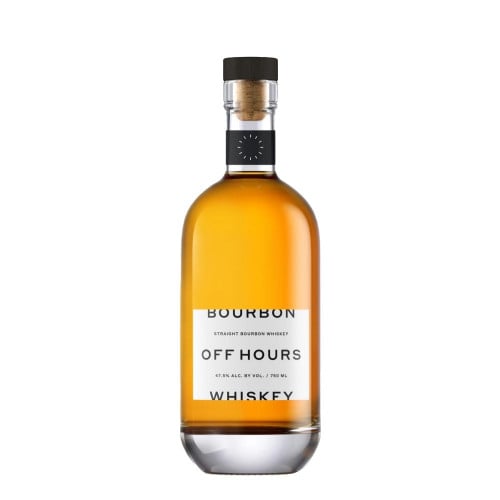 About Off Hours Bourbon

Off Hours was founded by Californian Jake Ireland with the aim of changing some of the antiquated views that normally come with the spirit. Before that he helped launch the Spirit of America brand in 2013, eventually selling it. He began thinking about creating a bourbon that would feel modern, approachable, and minimalistic ― no smoke and mirrors, just great bourbon for the discerning next-generation modern drinker. Most of all, it would need to be versatile, being equally suited to family BBQs, hanging out with friends, as well as sipping in bars.

"Off Hours Bourbon is meant to engage our senses and change perceptions. It’s not about preconceived notions of artisanal cocktails and dimly lit bars. It’s for everyone, everywhere," says Ireland. The catch here is that there is no catch ― Ireland is perfectly upfront about what the spirit is and where it comes from ― a refreshing and commendable stance in a world where the contents of a bottle are often a mystery.

Off Hours Bourbon took a year to perfect. It is a 5-year-old bourbon from the MGP distillery in Lawrenceburg, Indiana that was aged in American white oak at the distillery. The mash bill consists of 75% corn, 21% rye, and 4% malted barley. It's bottled at 95 proof, making it a proper sipper that works just as well in cocktails. Smooth, balanced, and versatile, it's a modern bourbon for any occasion.

Get your bottle of this modern classic today!

The balanced profile has vanilla, nutmeg, and toasted pecans on the nose. The palate is rich and smooth with honey, peach, and cinnamon. The finish is silky smooth with lingering honey and fruit.