Size750mL Proof80 (40% ABV)
This hopped whiskey from New Holland Brewing in Holland, Michigan, is twice distilled in a wash of 100% fermented barley before it's infused with centennial hops. Flavorful and delicate with subtle floral notes and vanilla hints.
Notify me when this product is back in stock. 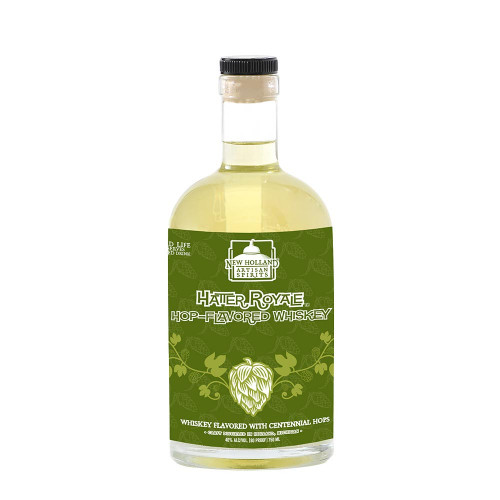 Inspired by the double-barreling process used at some of Scotland's most revered distilleries, Brett VanderKamp – New Holland Brewing's founder and master distiller — decided to start aging whiskey in used beer barrels. Scotch, which is traditionally aged in ex-bourbon casks, is often double-barreled, or finished, in sherry casks. "The notes of sherry add another layer of complexity, color and richness to the Scotch," explains VanderKamp. "I thought we could do the same thing for whiskey."

Founded in 1997 near the shores of Lake Michigan, New Holland Brewing Company owns a microbrewery and a distillery – New Holland Brewery and Artisanal Spirits – in Holland, Michigan. “One of the leading innovators in the revolution of craft brewing and distilling,” their core range includes craft beer, gin, rum, vodka, whiskey and liqueur.

Released in 2017, New Holland Hatter Royale Hopped Whiskey is a unique expression, riding the wave of hopped whiskeys. Twice distilled in a wash of 100% fermented barley, centennial hops are then added to the malt at 85 proof. Sweetened with 3% cane sugar, this vivacious whiskey is finally bottled at 80 proof. The result is extremely flavorful and delicate with subtle floral notes mingling with vanilla and spicy hints on the palate. A new and exciting expression, this hopped whiskey is remarkably well-balanced.

Get your hopped whiskey today!

Distinct yellow hue. A malty and bitter nose from the hops. The palate is well-balanced and sweet with creamy vanilla and light spicy and citrus notes shining through. The finish is long with lingering hops and malty notes.