Size750mL Proof91 (45.5% ABV)
This whiskey is the flagship product of Nelson's Green Brier. Crafted with a wheated mash bill that's based on the historic family recipe, this whiskey marks the resurrection of the brand as the first bottling of Green Brier whiskey since the operation shut down during Prohibition.
Notify me when this product is back in stock. 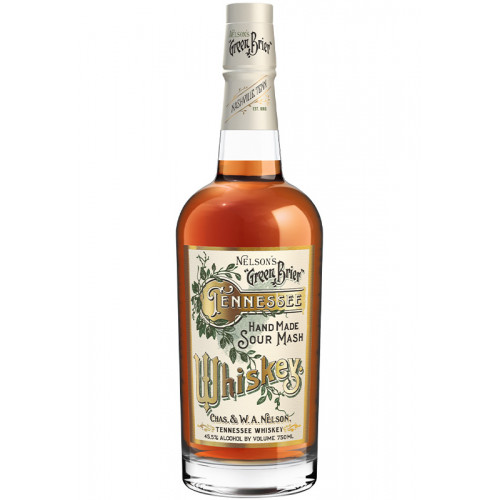 Born in 1835 in northern Germany, Charles Nelson moved to America with his family when he was 15. As his father and all their possessions ended up at the bottom of the ocean, Charles became the man of the house, making soap and candles with his brother. When he was 17, they moved to Cincinnati, Ohio, where Charles acquainted himself with the art of producing and selling spirits. He eventually opened a shop in Nashville, mostly selling coffee, meat, and whiskey.

As Charles' reputation grew, he realized that the demand for whiskey was through the roof, he sold his grocery business and purchased the distillery that had been making whiskey for him. Located in Greenbrier, Tennessee, the distillery began expanding as the demand for whiskey increased. By 1885 their production capacity was among the highest in Tennessee, selling around 2 million bottles of Green Brier Tennessee Whiskey that year. During Prohibition, the distillery closed its doors and eventually fell into disrepair.

In 2006, brothers Charlie and Andy Nelson visited Greenbrier. Seeing the legacy of their great-great-great grandfather with their own eyes, they made a pact to revive the family whiskey business. After 3 years of research, the business was resurrected ― exactly 100 years after it has closed down during Prohibition. Now they produce small-batch bourbon with the help of Charles Nelson's original recipes.

Nelson's Green Brier Tennessee Whiskey is based on one such family recipe and is the first bottling since 1909. The award-winning expression is aged in new charred oak barrels and filtered through sugar maple charcoal. The wheated mash bill and meticulous process are what made this historic whiskey special back in the day, and the pair embraced their legacy in style ― with a delicious 91-proof spirit with notes of caramel, vanilla, cinnamon, apple, and hints of cocoa.

Get your bottle of this historic whiskey today!