Size750mL Proof80 (40% ABV)
The Laujac estate has been home to winemakers for centuries. René-Philippe Duboscq has expanded the operation to include 100% French single malt whisky production. This expression first spends 2 years in French oak before being finished for another year in AOC Médoc wines from 100% Cabernet Sauvignon.
Notify me when this product is back in stock. 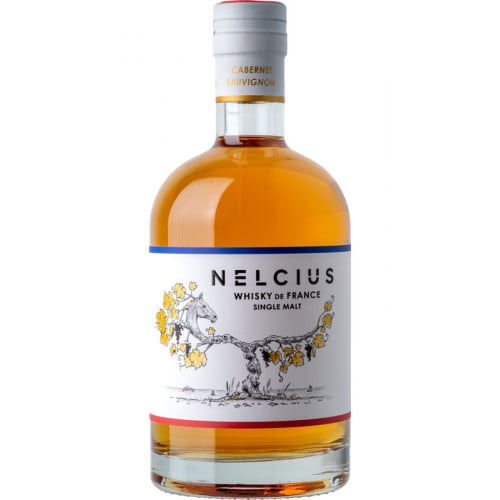 The 400-hectare Laujac estate is located in the heart of the Médoc region of France. With its roots dating to Gallo-Roman times, the neoclassical Chateau was built in 1810. The estate's winemaking business thrived under the Cruse family for several generations until the beginning of the 20th century. After 2 world wars and several natural disasters, Bernard Cruse took over in 1957. With only 8 hectares of vines remaining, he took it upon himself to revive the vineyards and modernize the entire operation.

In 2012, 55 vintages later, his daughter Vanessa and his son-in-law René-Philippe Duboscq took over, continuing to invest in the vineyards, raising the quality, while respecting the environment. Today, René-Philippe carries on his family tradition both as a wine producer and horse breeder, as well as whisky maker. The Nelcius whisky brand is a tribute to his father's horse of the same name that won the Prix du Jockey Club in 1966.

Nelcius Single Malt French Whisky is 100% French, meaning that the barley is grown, malted, and distilled in France. The whisky is double-distilled through small Carle-style stills, ensuring the preservation of delicate flavors and intense aromas. Then, the spirit is matured in their own wine barrels. After 2 years of aging in French oak, this expression spends another year in casks that previously held AOC Médoc wines from 100% Cabernet Sauvignon. Bottled at 80 proof, the whisky is lively and balanced with vanilla, brown sugar, fruit, and Cabernet Sauvignon notes.

Get your bottle of this unique French whisky today!

The amber-colored whisky opens with brown sugar and preserved fruit aromas on the nose. The palate is lively, balanced, and pleasantly sweet with prominent vanilla notes. Look for dark fruit notes on the sweet and medium-long finish.