Size750mL Proof100 (50% ABV)
Crafted with 94% corn, 4% rye, and 2% malted barley in Indiana, aged in Kentucky, and finished at Mulholland's facility in Ukiah, California, this whiskey is bottled at 100 proof. 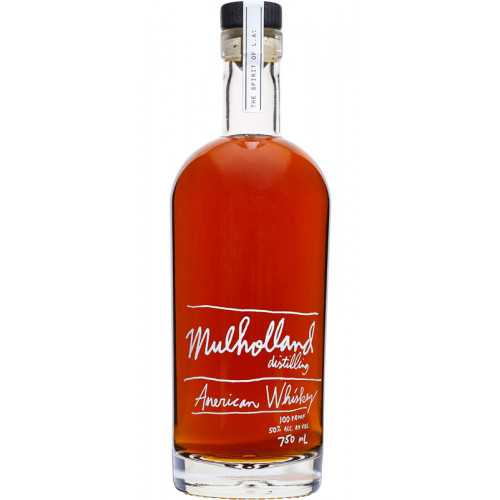 Based in the Arts District of Downtown Los Angeles, Mullholland Distilling was founded by 3rd generation Angeleno Matthew Alper and actor Walton Goggins, both ― naturally ― spirits aficionados. The pair has known each other for 2 decades but it wasn't until Alper had a "eureka" moment during a BBQ where he realized Los Angeles lacked distilleries. The operation has the distinction of being one of the first Los Angeles spirits brands since Prohibition. Their gin is crafted with 100% non-GMO corn and juniper, coriander, French lavender, Japanese cucumber, and Persian lime botanicals. Their vodka is a double charcoal filtered 86-proof affair that drinks super clean.

Mulholland American Whiskey counts among their most interesting releases. The award-winning whiskey is crafted with a mash bill of 94% corn, 4% rye, and 2% malted barley in Indiana, aged in Kentucky, and finished at Mulholland's facility in Ukiah, California. Bottled at 100 proof, it's a delicious sipper as well as the perfect cocktail base with vanilla, sweet corn, spices, oak, caramel, and dried fruit notes.

The nose opens with vanilla, sweet corn, maple, and a touch of baking spices. On the rich and gently sweet palate, you'll find oak, dried fruit, and herbal rye. The finish is smooth with lingering caramel, toffee, and rye spice.