Be the first to review this product
This bourbon earned the Gold Medal at The Fifty Best Tasting Competition, while this rye was named a "Must-Try Whiskey" by Wine Enthusiast.
Add to Wish List
Notify me when this product is back in stock.

Catskill Distilling Company's Most Righteous Bourbon is the result of a collaboration between Sachs and Lincoln Henderson, the creator of Woodford Reserve Bourbon and Gentleman Jack Tennessee Whiskey. Sachs sources a mash of 70% corn, 20% rye and 10% malted barley from Cochecton Mills, a local farm in upstate New York, and then mills the grains inside his 5,000 square-foot distillery using a hammer mill.


After the bourbon and rye have been distilled, Sachs pours the whiskies into 25-gallon, charred American oak casks and allows them to mature. "Much of the way they taste is because of our maturation house," says Sachs. The casks are placed in Catskill Distilling Company's temperature-controlled warehouse, which was specially designed to accelerate the whiskey's maturation process. The temperatures in the warehouse are constantly monitored and altered in order to increase the exposure of the spirits to the oak. After a two-year slumber, the bourbon and rye are brought to proof and bottled by hand.

Most Righteous Bourbon has an aroma of caramel and fudge, with initial notes of butterscotch, toffee molasses and dried fruits on the palate. The flavors give way to slightly spicier notes of cinnamon, ginger and a touch of spice before leading to a soft, smooth finish. Most Righteous Bourbon earned the Gold Medal at The Fifty Best Tasting Competition in 2012 and was "highly recommended"in F. Paul Pacult's Spirit Journal.

Initial notes of butterscotch, toffee and molasses compliment hints of citrus and dried fruits. Mid-palate is slightly spicier, with notes of cinnamon, ginger and spice. Medium finish is light and smooth. 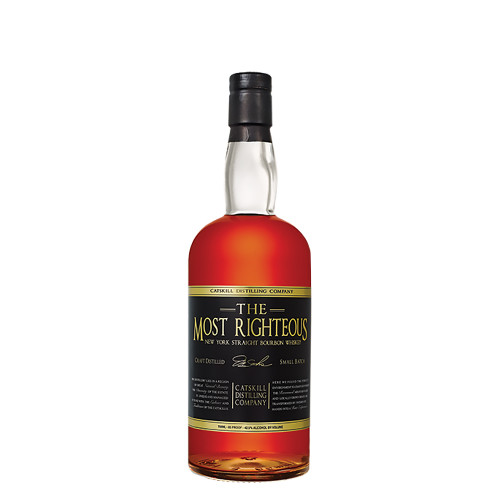