Learn more
Size750mL Proof86.8 (43.4% ABV) *Please note that the ABV of this bottle may vary
This single malt is one of the first released by Mortlach Distillery, “the Beast of Dufftown,” which is famous for contributing whisky to Johnnie Walker blends.
Notify me when this product is back in stock. 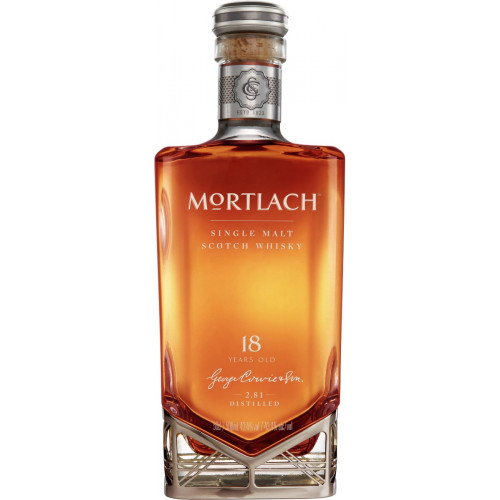 Mortlach 18 Year Old Single Malt Scotch Whisky is part of the newest range of Mortlach single malts. Presented in a bottle designed by Laurent Hainaut, the whisky has a golden amber color and vibrant citrus notes on the nose, especially green apple and dried mango. The palate opens with a tad more sweetness, including gingerbread and orange peel, before developing into a thick, silky combination of dark chocolate and almonds. The whisky finishes with a dry, earthy spice, conjuring wood and even some tobacco leaves.

Golden amber color and vibrant citrus notes on the nose, especially green apple and dried mango. Palate opens with a tad more sweetness, including gingerbread and orange peel, before developing into a thick, silky combination of dark chocolate and almonds. Finishes with a dry, earthy spice, conjuring wood and even some tobacco leaves.