Learn more
Size750mL Proof80 (40% ABV) *Please note that the ABV of this bottle may vary
Made from 100% estate-grown corn, this moonshine was made by the first legal craft distiller in the United States since Prohibition.
Notify me when this product is back in stock. 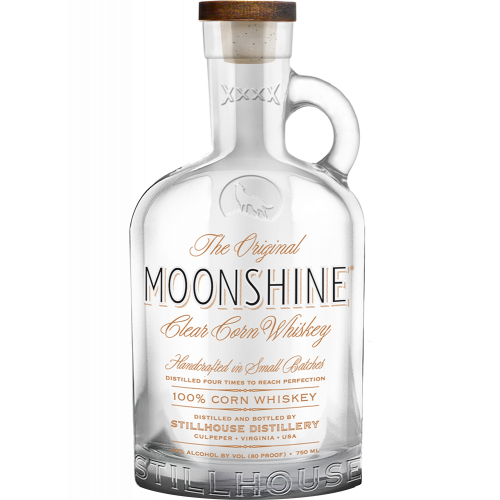 About The Original Moonshine

During the Civil War, Culpepper, Virginia served as a crossroads for the Union and Confederate forces that took turns occupying the town.  In June 1863 — just one month before the Battle of Gettysburg — 20,000 soldiers clashed at Brandy Station just outside of Culpepper, engaging in what became the largest cavalry battle in the history of the Western Hemisphere.

In 1975, Chuck Miller moved to Culpepper with his wife, Jeanette, and began harvesting corn and hay on his 124-acre farm. In true Southern tradition, Miller began distilling moonshine on his farm in the same fashion that his grandfather had decades earlier. In 1986, Miller applied to the federal government for a commercial license to distill spirits. "Heck, I couldn't get the paperwork right,"he says. "They kept sending it back to me. I felt like I was in the second grade."After a lengthy application process that took over a year, Miller finally became the first legal craft distiller in the United States.

At Stillhouse Distillery in Culpepper, Miller oversees the distillation of every batch of The Original Moonshine. After growing and harvesting his own corn on the same farm he purchased in 1975, Miller grinds and ferments it at the distillery. After fermentation, he distills the wash four times in an authentic, Prohibition-era copper pot still made in New York City. Then, he charcoal filters the moonshine before filling and labeling each bottle by hand. Made from 100% corn, The Original Moonshine is gluten-free. It has a light, grainy aroma and a sweet flavor profile with notes of corn.

"Yes sir, my granddad made a lot of whiskey during Prohibition,"Miller says with a heavy drawl. "He never had a real job — just made a lot of money making 'shine."

Once, Miller admits, his grandfather was making a run of moonshine to Washington, D.C. during Prohibition. When federal agents, who were waiting for him near the Fourteenth Street Bridge, attempted to bring him into custody, he tried to escape. The agents shot his truck, putting bullet holes in the windows and frame, but Miller's grandfather was able to escape, returning home later that evening.

Moonshining is a Miller family tradition. Try a bottle of The Original Moonshine today!

Clear but with a slightly yellow tinge. Mild on the palate with a light sweetness. Notes of corn predominate but has a hint of honey and vanilla.