Learn more
Size375mL Proof94 (47% ABV) *Please note that the ABV of this bottle may vary
Crafted with 47 unique ingredients, this gin was named one of the ten best by The Independent. The gin also earned a score of 93 points from the Beverage Testing Institute in 2014. 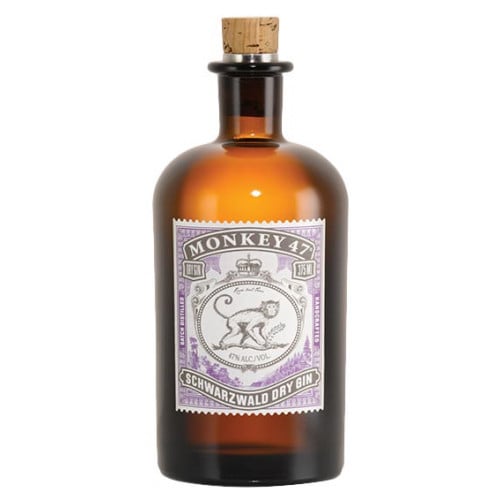 Bottled at 47% ABV, Monkey 47 Schwarzwald Gin has an aroma of wood spices, vegetables, citrus and pine. The aroma gives to way to an incredibly complex bouquet of flavors, including earthy spices, fruit, herbs and tart citrus. The finish is rich and bursting, with a hint of lemon balm.

Monkey 47 earned the World Spirits Award Gold at the International Wine and Spirits Competition, and was named one of the ten best gins by The Independent. The gin also earned a score of 93 points from the Beverage Testing Institute in 2014.

Aroma of wood spices, vegetables, citrus and pine. Incredibly complex bouquet of flavors, including earthy spices, fruit, herbs and tart citrus. Finish is rich and bursting, with a hint of lemon balm.