Size750mL Proof92 (46% ABV)
This expression is based on the M&H Classic Single Malt Whisky. It was matured in both Oloroso and PX sherry casks that were brought to the Israeli distillery after being seasoned with sherry for one year.
Notify me when this product is back in stock. 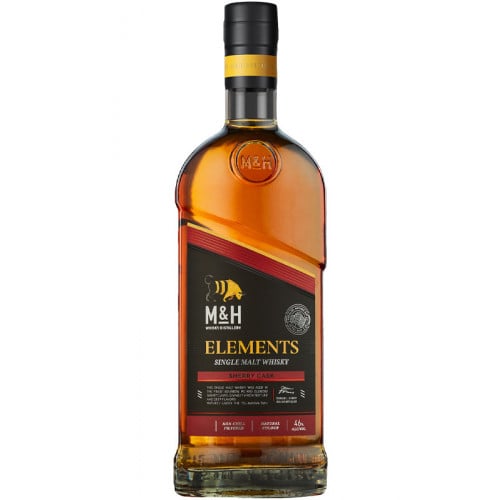 The Elements series is based on the M&H Classic Single Malt Whisky. Then, each expression is complemented with hand-picked, meticulously selected casks that enhance the core spirit in different ways. The Elements series brings together traditional distillation methods with various casks that have benefitted from maturing in a unique, hot climate. M&H Elements Sherry Cask had the M&H team travel to Jerez, Spain, in order to procure Oloroso and PX sherry casks that were seasoned with sherry for a year before being brought to the distillery. With notes of red fruit, dark chocolate, and oak, it's the first single malt to be aged in kosher sherry casks. The award-winning expression is bottled without chill-filtration and added coloring at 92 proof.

Get your bottle of this unique Israeli sherried single malt today!

Israel’s first whisky distillery, Milk & Honey Distillery is an urban distillery that opened its doors in Tel Aviv in 2014. Named after a line in Exodus indicating the promised land (Israel), it was founded by tech entrepreneur Gal Kalkshtein and his team – Amit Dror, Simon Fried, and Roee and Naama Licht. Milk & Honey whisky ages quickly and gracefully in Israel’s hot and sunny climate. With the late Dr Jim Swan as advisor, their journey began with carefully selecting ex-bourbon, ex-red wine and STR casks to mature their whisky in for at least 3 years. Not ones they’re always on the lookout for new, exotic casks such as pomegranate wine, kosher, sherry etc. Distilled in custom-made traditional copper pot stills, Milk & Honey whisky is made with centuries-old methods. Their impressive range consists of gins, roots herbal liqueur and single malts in numerous cask-finishes.
Explore all Milk & Honey bottles >>

The nose is bright with red fruit, oak, caramel, and lemon zest aromas. The palate is light, medium-bodied, and sweet with sherry, fruit, dark chocolate, and gentle oak. The finish is long with lingering chocolate, nuts, tobacco, and oak.