Size750mL Proof118.8 (59.4% ABV)
The Apex series from Israel's first whisky distillery features limited-edition expressions that represent the culmination of the distillery's journey as well as the expertise of Head Distiller Tomer Goren. This expression was finished in hand-picked French Limousin oak casks that previously held cognac.
Notify me when this product is back in stock. 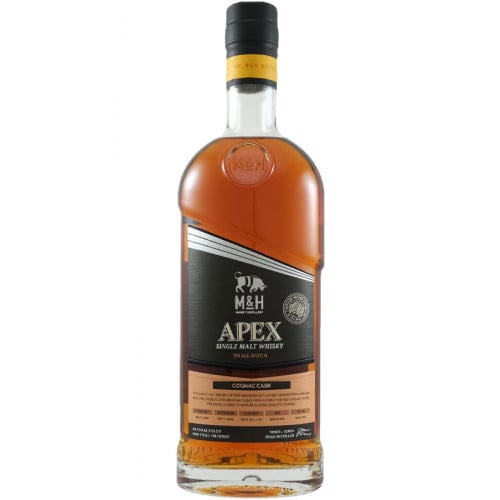 With some help from the late Dr Jim Swan, Milk & Honey journey began with carefully selecting ex-bourbon, ex-red wine, and STR casks to mature their whisky in for at least 3 years. The Apex series is a culmination of years of work, research, innovation, and creativity. Like all the releases in the series, Apex Cognac Cask is a limited-edition expression. After the single malt was matured in ex-bourbon and STR casks, it was finished in 400-liter French Limousin oak casks. These ex-cognac casks were hand-picked by Head Distiller Tomer Goren. Bottled at 118.8 proof without chill-filtration and added coloring, it's a rich and fruity expression with a complex array of spice notes.

Get your bottle of this limited-edition Israeli single malt today!

Israel’s first whisky distillery, Milk & Honey Distillery is an urban distillery that opened its doors in Tel Aviv in 2014. Named after a line in Exodus indicating the promised land (Israel), it was founded by tech entrepreneur Gal Kalkshtein and his team – Amit Dror, Simon Fried, and Roee and Naama Licht. Milk & Honey whisky ages quickly and gracefully in Israel’s hot and sunny climate. With the late Dr Jim Swan as advisor, their journey began with carefully selecting ex-bourbon, ex-red wine and STR casks to mature their whisky in for at least 3 years. Not ones they’re always on the lookout for new, exotic casks such as pomegranate wine, kosher, sherry etc. Distilled in custom-made traditional copper pot stills, Milk & Honey whisky is made with centuries-old methods. Their impressive range consists of gins, roots herbal liqueur and single malts in numerous cask-finishes.
Explore all Milk & Honey bottles >>

The nose opens with spice notes of clove, thyme, and star anise that give way to mango, dark chocolate, and stone fruits. The palate is rich and warm with nutmeg, fruity sweetness, and berries. The finish is creamy with apple pie, toasted barley, and chocolate.