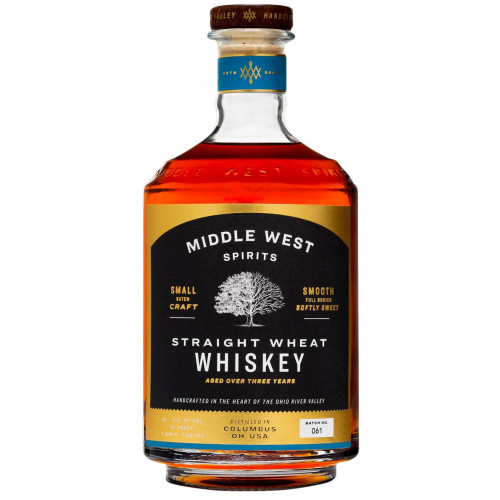 "Part of the reason I started a distillery has to do with my family lineage," says Ryan Lang, the master distiller at Middle West Spirits. "There's four generations of distillers blood in my veins, although I might be the first generation to do this legally." Situated in a 10,000 square-foot warehouse in the heart of the Ohio River Valley, Middle West Spirits was founded in 2008 by Lang, together with his business partner, Brady Konya, a marketing wizard. Together, the pair marry modern distillation techniques with traditional craftsmanship and the finest ingredients — and it's working.

Their small-batch Middle West Straight Wheat Whiskey is made exclusively from Ohio soft red winter wheat. "We wanted to find something that best reflected the Ohio River Valley's unique terroir," says Lang. After a tireless search, Lang and Konya identified a wheat varietal growing in northeastern Ohio that enjoyed a nutrient-rich, clay soil. "The soil draws water from the wheat, and what's left in the wheat is a flavor that's more caramel in taste than wheat from other regions," says Lang. "That's the flavor we wanted for our brand's footprint." Back at Middle West Spirits Lang mills and mashes the grains before fermenting them in an open-top fermentation tank.

Once the whiskey has been distilled, it is aged for upwards of 3 years in American white oak casks. The expression has garnered several prestigious awards over the years, ranging from the SF World Spirits Competition to the NY Wine & Spirits Competition and Wizards of Whisky. It was called "A great example of New World whiskey" by the Difford's Guide.

The nose has aromas of fruit cake, nougat, leather, and buttercream. Creamy and medium-bodied, it's creamy, dry, and fruity on the palate, culminating in a smooth and spicy finish with nuts, dried cherries, wheat bread, and baking spices.