Size750mL Proof86 (43% ABV)
Aged in bespoke barrels, Michter’s award-winning US1 Sour Mash Whiskey is the cornerstone of this Toasted Barrel Sour Mash Whiskey.
Notify me when this product is back in stock. 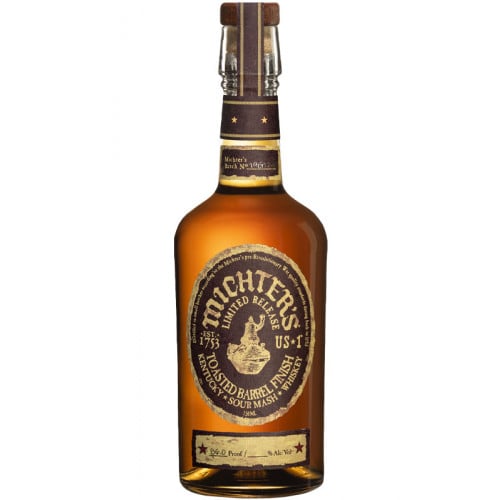 In the 18th century, a Swiss Mennonite farmer by the name of John Shenk settled his family near Pennsylvania’s Blue Mountain Valley. After a few years of hard work and long hours, Shenk was harvesting more grains that he could sell at the local market. As a result, Shenk purchased a still and began distilling the excess grains he harvested into whiskey. His distillery, which was eventually named Michter’s, became the United States’ first distilling company.

The passage of Prohibition in 1919 forced Michter’s, along with nearly every other distillery in the United States, to close. In the early 1990s, however, Joseph J. Magliocco teamed up with Richard Newman in an effort to resurrect the brand. “When we set up our whiskey program for Michter’s,” says Magliocco, “Dick and I wanted to get back to the “cost be damned” roots and produce the finest whiskey possible. Our goal was to show that whiskey made in the United States could be the equal of great whiskey made anywhere in the world.”

This custom made barrel is assembled from 18-month air-dried wood before being toasted (not charred). Several different levels of toast were carefully evaluated for the second barrel before the Michter’s production team led by Master Distiller Dan McKee and Master of Maturation Andrea Wilson decided on the final bespoke cask that would best display the elegant nuances of this special whiskey.

Toffee and buttery vanilla notes up front with fragrant honey, milk chocolate, and a hint of orange peel. Mid-palate the toasty campfire notes appear and intensify the cherry and spice notes in this elegant whiskey.