Be the first to review this product
Crafted from 17 year old agave, this mezcal is distilled through clay pot stills.
Add to Wish List
Notify me when this product is back in stock.

In Mexico, mezcals are distilled in an entirely natural and unhurried process, often utilizing traditions and family recipes that have been passed down for generations. The principal ingredient used in crafting mezcal — the agave plant — requires seven to twenty years to mature before being harvested. While a few varieties of agave have been domesticated, others must be harvested from the wild, rugged terrains of Mexico's tiny villages. As a result, a single batch of mezcal, which can produce as few as 1,000 bottles, begins with the harvesting of 10 tons of agave and can take up to 25 years to produce, from start to finish.

Mezcal Vago Tobalá is crafted using agave grown on the fields of Salomón Rey Rodriguez, who is commonly referred to as "Tío Rey."Tío Rey's estate, which is situated at 1,450 meters above sea level, has a bountiful supply of pure spring water and a cool climate and is ideal for the cultivation of intense and flavorful agave.

After the Tobalá agave growing on Rey's estate have matured for 17 years, they are harvested by hand in order to craft Mezcal Vago Tobalá. Then, the the piñas or hearts of the agave, are crushed with wooden mallets called mazos before being roasted in earthen ovens (Rey has two earthen ovens — one is made from a hole in the ground and lined with large river rocks and the other is dug straight into bedrock).

After the piñas have been cooked in the ovens, the remaining agave juice is fermented before being distilled through clay pot stills. As the alcohol vapors condense at the top of a still, an agave leaf works as a large spoon to catch the mezcal and run it into a bamboo shoot.

This unique process gives Mezcal Vago Tobalá a mild aroma of pine, pineapple and allspice that gives way to bold and intense notes of nutmeg, citrus, black pepper, ginger and a hint of oak on the full-bodied palate. The finish is sublime, with touches of cloves and earthy minerals.

Mezcal Vago Tobalá is a one-of-a-kind spirit made by hand.

Mild aroma of pine, pineapple and allspice. Bold and intense notes of nutmeg, citrus, black pepper, ginger and a hint of oak on the full-bodied palate. Finish is sublime, with touches of cloves and earthy minerals. 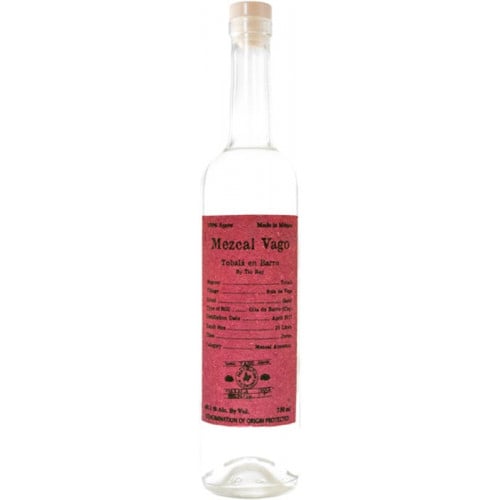