Size750mL Proof90 (45% ABV)
Aged for a minimum of ten years, this Kentucky Straight Bourbon Whiskey was first launched in 1873 by the Medley family.
Notify me when this product is back in stock. 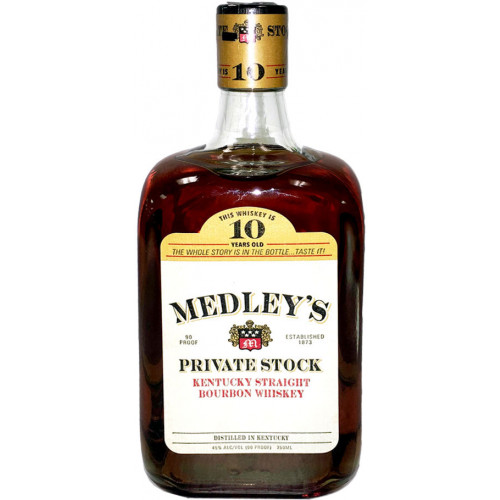 Charles W. Medley, president of his namesake distillery in Owensboro, Kentucky, is a seventh generation master distiller. His family’s roots run back to the birth of Kentucky bourbon; while Reverend Elijah Craig is usually credited with producing the first bourbon whiskey at his mill in Lebanon in 1789, Medley’s ancestors were distilling whiskey at the same time in the adjacent county in Kentucky. In fact, except during the thirteen years during which distillation was outlawed in the United States, a member of the Medley family has been operating a distillery continuously since 1812.

Following the repeal of Prohibition in 1933, Thomas Aquinas Medley began production of a new bourbon in the heart of Kentucky. Thomas died shortly thereafter, but the Medley Distilling Company continued to produce Kentucky bourbon for the next five decades. Today, under the tutelage of Charles W. Medley and his son Samuel, the distillery (recently renamed the Charles Medley Distillery) continues to distill bourbon using the same recipes and techniques that generations of Medleys perfected over the past two centuries.

Paying homage to Charles's great-great-grandfather, George Medley, who launched Medley’s “Private Stock” in 1873, Charles and Sam have recently decided to revive the “Private Stock” brand after discovering an old bottle in the distillery’s basement. Made from an old family recipe which uses rye as the secondary grain, Medley’s Private Stock 10 Year Old Kentucky Straight Bourbon Whiskey is aged for a minimum of ten years before being bottled at 90 proof.

As a result, Medley’s Private Stock has an aroma of popcorn, caramel and melted butter, which leads to a palate filled with notes of french toast, apricot jam and rice pudding. The finish is sweet and complex, with notes of dried peaches and maple syrup lingering on the tongue.

Only 1,000 cases of this limited-run bourbon will be released throughout the U.S. in 2015, so be sure to pick up a bottle today!

Aroma of popcorn, caramel and melted butter, which leads to a palate filled with notes of french toast, apricot jam and rice pudding. The finish is sweet and complex, with notes of dried peaches and maple syrup lingering on the tongue.