Size750mL Proof91 (45.5% ABV)
Made from a mash of 70% corn, 20% rye and 10% malted barley, this bourbon is aged is newly charred American oak and finished in former chardonnay casks.
Notify me when this product is back in stock. 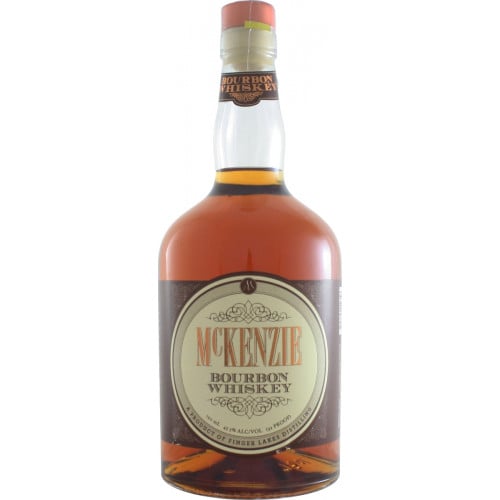 Surrounded by the grapevines of nearly 40 different wineries, Finger Lakes Distilling sits high above Seneca Lake in upstate New York's wine country. The architecture of the 5,000 square foot distillery — complete with a 15-foot-tall canoe-shaped chandelier and made using reclaimed lumber — was inspired by some of Scotland's most prestigious distilleries.

Just outside their distillery in Burdett, New York, Brian and Thomas McKenzie — Finger Lakes' founders (they swear they are unrelated) — are inspecting the holding tanks which store the corn, rye and malted barley used to make McKenzie Bourbon Whiskey. The corn and rye bins, nicknamed Corn-elia and Rye-ella, store grains sourced from local farmers in upstate New York, while the malted barley bin, nicknamed Malt-ilda, stores barley sourced from Canada.

After sourcing the grains, the McKenzies grind and mill a mash comprised of 70% corn, 20% rye and 10% malted barley. The mash is then fermented for approximately three days before being distilled inside a 350-gallon, two-ton Holstein copper pot still imported from Germany. Following distillation, the bourbon is aged at 100 proof inside 10-gallon, newly charred American oak casks for approximately 18 months. After aging in the American oak casks, the bourbon is double-barreled, or finished, in used Chardonnay casks sourced from one of the many wineries that surround Finger Lakes Distilling. The Chardonnay casks impart a rich, buttery flavor to the bourbon, and round out its notes of toffee, apricot and cinnamon.

"As far as distilling spirits there's nothing more fun than making whiskey," says Brian McKenzie. "There are so many steps to the production — from mashing to distillation to the blending stage — there so many variables that can affect the flavors. Being a craft distiller, that's what's exciting about it."