Caskers Rewards members earn up to 3 store points back when buying this bottle.
Size750mL Proof90 (45% ABV) each
Aged for over a decade, this rye whiskey was bottled exclusively for Caskers members.
Notify me when this product is back in stock. 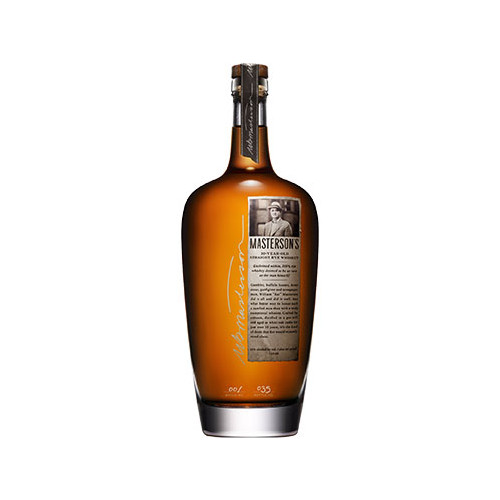 Born on November 26, 1853, William "Bat"Masterson left his family farm in Henryville as a teenager in order to become a buffalo hunter. After a few years hunting buffalo, Masterson became a scout for the United States Army during a campaign against the Kiowa and Comanche Indians. By the age of 24, he had moved to Kansas and was elected sheriff of Ford County. In 1879, Bat was voted out of office and spent the next several years making a living as a professional gambler and saloon owner. During this time, Masterson was said to avenged the deaths of his two brothers and his famous revolver was nicknamed "the gun that tamed the West." By the time he passed away in 1921, Masterson had done it all, and done it all well.

Made in homage to Bat, Masterson's 10-year-old Straight Rye Whiskey is made from 100% rye grains. The rye is grown in the verdant Pacific Northwest, where only grains that exhibit the perfect combination of weight, plumpness and rich, earthy fragrance are harvested. After the grains have been milled and mashed, they are fermented with inoculated, dry yeast, which help give Masterson's Rye its unique flavor profile. The wash is then distilled through pot stills, before being aged in white-oak casks for over a decade.

Cask Number 16 and Cask Number 17 of Masterson's Rye Whiskey were bottled exclusively for Caskers members. After aging for a decade in American oak casks, the whiskey from each barrel was double-barreled, or finished, in medium-sized toasted French oak casks.

As a result, Cask Number 16 has a dark caramel aroma, with hints of oak tannins and cinnamon. The aroma gives way to notes of roasted nuts, dark chocolate and vanilla, which are complemented by a bold citrusy undertone. The finish is long and robust, with notes of cloves and baking spices mingled with sweet undertones of graham crackers, maple syrup and toasted rye. Cask Number 17 is slightly lighter and sweeter, with hints of toffee, butterscotch and vanilla pods throughout.

Masterson's Rye Whiskey was awarded 94 points from Whisky Advocate and was rated the #1 whiskey in the Spring 2013 issue. In addition, it earned a triple gold medal at the MicroLiquor Spirits Awards in 2011 and the Chairman's Trophy with a score of 94 points from the Ultimate Beverage Challenge in 2012.

Pick up a bottle of each cask today!

Cask 16: Dark caramel aroma, with hints of oak tannins and cinnamon. Notes of roasted nuts, dark chocolate and vanilla, which are complemented by a bold citrusy undertone. Finish is long and robust, with notes of cloves and baking spices mingled with sweet undertones of graham crackers, maple syrup and toasted rye. Cask 17: Slightly lighter and sweeter, with hints of toffee, butterscotch and vanilla pods throughout.