Size750mL Proof90.4 (45.2% ABV)
A closely guarded G&T secret of bartenders, this bold and flavorsome gin is bottled at a higher proof of 90.4 proof. A super premium gin, it's made with British wheat and Icelandic fresh spring water.
Notify me when this product is back in stock. 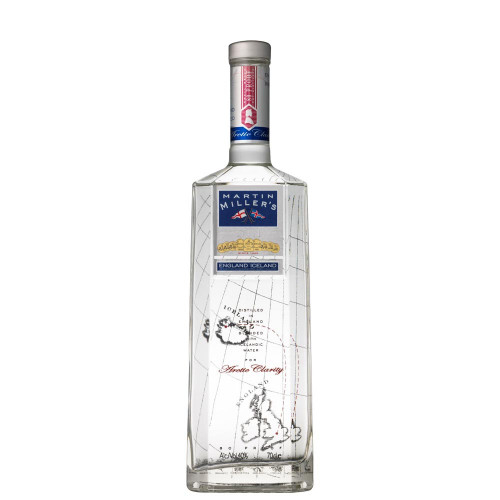 "Martin Miller was a British man of many talents and hobbies – he was an art lover, a photography enthusiast, he published an etiquette guide and Miller’s Antique Price Guides, hosted pop concerts, and even founded the Miller’s academy for art and science lectures – one of his many loves, however, was the national drink of the British nation – the good ol’ G&T. However, back in the late 1990's, the gin scene was not in great shape in the UK and Miller had an eye-opening experience when he had lunch with his two friends in a London pub and got served a common old gin brand with some flat tonic water.

And this is how the story of Martin Miller’s Gin began in 1999. At first, they had zero commercial goals and the three friends said to themselves, if nothing else, we’ll have a lifetime supply of high-quality gin. The beginnings were hard. The first "super premium" gin was made in a single pot still, affectionately called Angela and Martin Miller’s Gin was not an overnight success. Miller says that "from 1999 to 2007 it was like boiling the ocean." The winds have changed since then, however, and premium gin is much sought after these days. In the last 15 years, Martin Miller's Gin has consistently won numerous awards at the world's leading spirit competitions.

After the original 80 proof Martin Miller’s Gin was released in 1998, Martin Miller wanted to satisfy the increasing requests from mixologists to craft a higher strength flavorsome gin. Immediately a favorite of bartenders everywhere, Martin Miller’s Westbourne Strength Gin was a closely guarded secret for a long time. This wheat-based gin is brought down to proof with Icelandic fresh spring water and bottled at 90.4 proof. Its intense and citrus-forward palate with spicy, peppery flavors and subtle sweetness is even more pronounces at the higher craft strength and evokes a smooth drinking experience. It’s the perfect mixer.

Martin Miller’s Westbourne Strength Gin has garnered some of the highest scores ever at prestigious competitions and it was named The World’s Best Gin according to BTI in 2020.

Get the bartenders’ secret to a flavorsome G&T!

Clear color. The nose is intense, greeting with citrus peels and juniper aromas. The palate is bold with subtle sweetness from liquorice bringing the citrus notes forward. The finish is long and refreshing.