Size750mL Proof94 (47% ABV)
Bold and crisp, this gin earned the Double Gold Medal at The Fifty Best Tasting Competition in 2013. 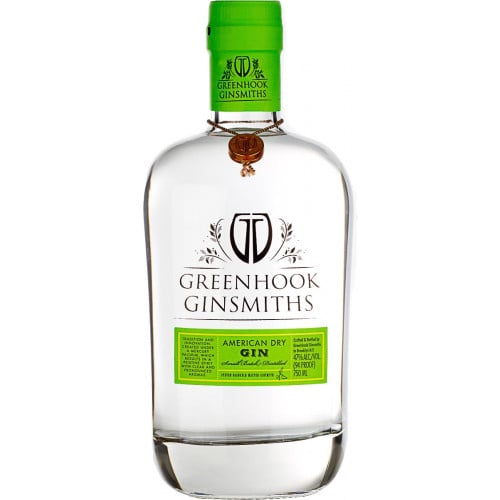 Working behind a custom-made 300 liter copper alembic still outfitted with a specially designed mercury vacuum, master distiller Steven DeAngelo uses an innovative technique to reduce atmospheric pressure in his still during the distillation process. As a result, DeAngelo is able to distill his gin at lower temperatures than traditional ginsmiths, resulting in a cleaner, more pristine spirit that captures the raw integrity of the botanicals.

Those botanicals — juniper berries from Tuscany, organic chamomile, organic elderflower, blue ginger, orris root and Ceylon cinnamon — give the gin a citrusy flavor, and earned it the Double Gold Medal at The Fifty Best Tasting Competition in 2013.

Greenhook Gin is strong — 94 proof — but its flavors are distinct and sharp. It's also surprisingly well-balanced, its component flavors complementing one another and creating a whole that's greater than the sum of its botanical parts.

Fresh, fruity nose that hints of juniper, yellow citrus and elderflower. Notes of ginger, sweet cinnamon and chamomile lead to a finish with a burst of citrus.