Size750mL Proof75.6 (37.8% ABV)
This highly anticipated Bloody Shiraz release is steeped in Australian Shiraz grapes for up two eight weeks, yielding a highly aromatic gin bursting with shiraz flavor.
Notify me when this product is back in stock. 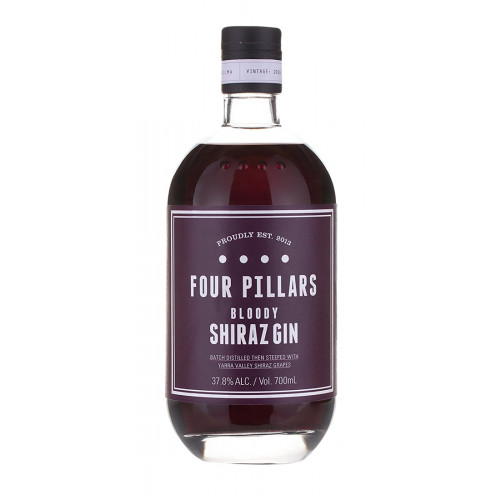 Four Pillars Gin launched in 2013, and was among the first craft gin distillers in Australia. Founded by wine makers Stuart Gregor and Cameron Mackenzie, alongside brand expert Matt Jones, the group launched the distillery in Yarra Valley just on the outskirts of Melbourne.

Four Pillars Gin is distilled by Cameron Mackenzie through the facility’s CARL still named Wilma after spending nearly two years researching and experimenting with botanicals, he came up with the final recipe. The gin is comprised of 10 botanicals: juniper, coriander, cardamom, lemon myrtle, star anise, lavender, cinnamon, Angelica, Tasmanian pepper berry leaf, and whole Australian oranges. The Four Pillars states “One day our distiller Cam thought, what would happen if you combined Four Pillars Gin with some of the best Shiraz grapes in Australia?” This is how Four Pillars Gin Bloody Shiraz was born.

Approximately around Easter in 2015, Mackenzie steeped the first Yarra Valley Shiraz grapes in high proof Rare Dry Gin for up to eight weeks. The fruits are first de-stemmed, but are kept whole before being pressed and blended with more Rare Dry Gin. The result is a beautiful vintage spirit that is born anew every year.

This 2017 release is a more vibrant ruby color than previous expressions, with the same signature Yarra Valley shiraz qualities - earthiness, complexity and subtle white pepper spice, and a balanced sweetness. This gin is highly aromatic with aromas of fresh pine needles, citrus and spice, and distinct peppery, dense raspberry notes. The palate is lovely and sweet with a long juniper and spice character on the finish. This spirit is cut to proof at 37.8% ABV, which is higher than most berry gins.

Dry spice on the nose with rich orchard fruits on the palate followed by fruit notes, citrus, leather, coriander and plum. The finish is smooth with subtle notes of shiraz grapes and spice.