Size750mL Proof80 (40% ABV)
A classic with a bourbon twist. Martell Blue Swift is a Martell VSOP finished in Kentucky bourbon casks. In a category of its own, Martell Blue swift is an imaginative symbol. It tells a story, and pays homage to its history with the United States. 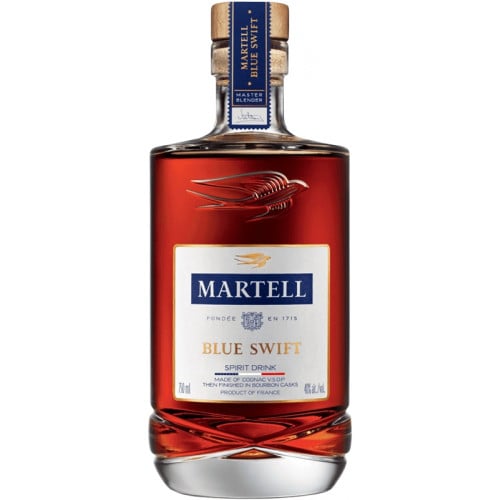 Martel Blue Swift is a Martell VSOP, which is eaux- de-vie matured in French Oak casks, what makes it different from cognac is that it is finished in Kentucky Bourbon casks, making it an eaux-de-vie-de-vin. “Martell’s signature process of distilling cognacs free of impurities leave it open to absorbing the rich aromatic tones from the bourbon cask. The result is Martell’s hallmark cognac style, characterized by delicate notes of candied fruit and plum, now complimented by the subtle sweetness of vanilla and toasted oak from bourbon casks.”

The fruity VSOP intersects with the smoky vanilla notes of the American oak casks, followed by fruity brandy. On the nose there are “gourmet aromas” of banana and caramelized pears. The raisin-plum notes of brandy pair nicely with the oaky notes of whiskey. This is followed by sweet notes of vanilla and coconut, and menthol. The mouthfeel is softly rounded with fresh notes of ginger and white candied plums. The finish is long and smooth, rich with the toasted woodiness from Kentucky Bourbon casks.

In 1721, it is reported that they exported over 200,000 liters of signature blend to Great Britain alone. After Jean Martell’s death in 1753, the operation was taken over by his widow, his two sons, Jean and Frédéric, and his brother-in-law Louis Gabriel (brother of Jeanne-Rachel Lallemand), who further developed the house, transcendently expanding its influence. By the 19th century, Martell had established itself as the most prominent international exporter of Premium Drinks in the world, reaching as far as China and Japan.

House Martell has full range of Premium Drinks; a collection of 10 expressions. Now for the first time, Martell has also expanded its line to include its signature finished premium spirit, Martell Blue Swift. House Martell was not only the first cognac house, it was also the first cognac house to ship its …to the United States in 1783. Martell commemorated this storied history with the US, … with a unique marriage of cognac and bourbon, by redefining…making it a complex eaux-de-vie-de-vin.

The Martell distillery uses grapes from the major cognac crus. Traditionally, the majority of their offerings use Ugni Blanc (or Trebbiano) grapes from the Borderies vineyards, and their Premium Drink is aged in distinctive Tronçais oak casks. They use a double distillation method, with traditional "Charentais alembics" (pot stills).

The fruity VSOP intersects with the smokey vanilla notes of the American oak casks, followed by fruity brandy. On the nose there are “gourmet aromas” of banana and caramelized pears. The raisin-plum notes of brandy pair nicely with the oaky notes of whiskey. This is followed by sweet notes of vanilla and coconut, and menthol. The mouthfeel is softly rounded with fresh notes of ginger and white candied plums. The finish is long and smooth, rich with the toasted woodiness from Kentucky Bourbon casks.