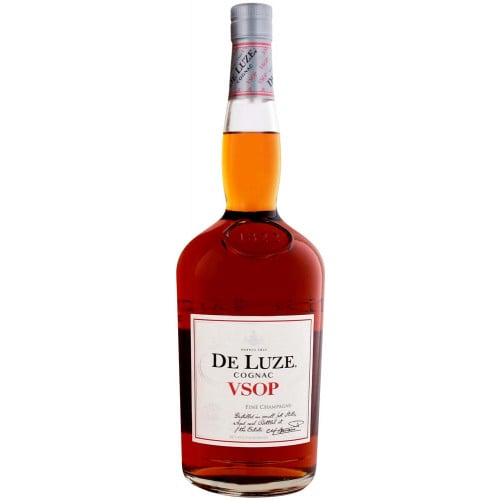 The history of De Luze cognac began in 1817, when Le Baron Alfred De Luze and his brother Louise-Philippe journeyed to New York where they eventually started their business, importing and exporting Wines and Cognacs. Five years later Alfred founded A. DE LUZE & FILS in Bordeaux, and in 1862, in pursuit of producing a very high quality cognac he purchased the Domaine du Chaigne in Grande Champagne.

In 1927, the De Luze house was granted the Royal Warrant by King Christian X of Denmark, to produce their Cognac. Meanwhile, in Angeac Champagne, Michael Boinaud is recommissioning the two family pot-stills, rekindling their operation.

After a period of time under French Spirits Group, De Luze was purchased by the Boinauds, who brought the brand back to the Grande Champagne region of Cognac, where Alfred’s production took place years ago 1862.

The Boinaud family owns the largest vineyard of the Cognac Appellation; over 400 hectares in the Grande Champagne region. Their vast vineyards produce an impressive range of high-quality cognacs composed 70% Grande Champagne, far exceeding the minimum requirement (50%) of the appellation.

In addition to owning the largest vineyard in the region, the Boinauds own the largest distillery of the Cognac region, with 41 charentais (Alembic) pot-stills. To produce the high quality and natural texture which characterizes De Luze, only unfiltered wines are distilled in small capacity pot-stills. A traditional double-distillation method is used to produce the eaux-de-vie used in their cognac.

The Boinaud family has its own cooperage where the Master Cooper produces and repairs barrels. Aged in bespoke French oak barrels, and blended specially by Cellar Master Eric Boinaud, the VSOP eaux-de-vie rests in French Oak Barrels for 4 years minimum.

De Luze VSOP is an outstanding blend of eaux-de-vie from Grande and Petite Champagne, the two best growing areas of the Cognac region whose blending yields the finest spirit. The wine is distilled unfiltered, with its "lees" in-house, using the Boinaud family's unique method, giving an exquisite finish to the cognac. With its rich fruit and floral notes, De Luze VSOP won a Gold medal at the San Francisco World Spirits Competition.

Pick up a bottle of this fine VSOP today!

On the nose are summer rose petals, and some darker, fruity notes of prunes, candied fruit, fruit cake. On the palate are prunes, vanilla, and cocoa. The finish is long and strong.