Learn more
Size750mL Proof110.8 (55.4% ABV) *Please note that the ABV of this bottle may vary
A standard Maker's Mark wheated bourbon is finished in two different stave profiles, which are then married. This is a complex blend with a flavorful palate that uncovers a new layer with each sip.
Notify me when this product is back in stock. 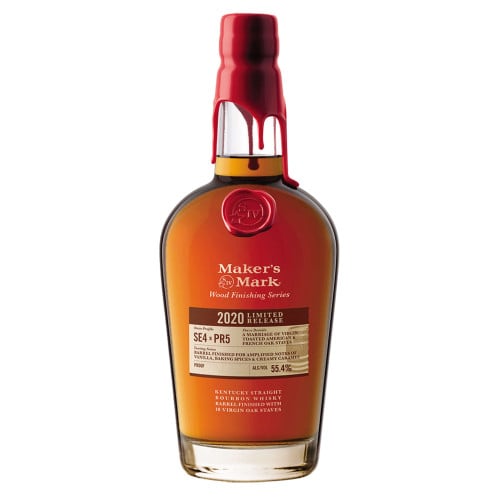 Beginning as a standard Maker's Mark wheated bourbon, Maker's Mark Wood Finishing Series SE4xPR5 2020 Release is finished with ten seared oak staves, which are placed inside the barrels. Two stave profiles were used – SE4 and PR5 – marrying virgin French oak with virgin toasted American oak staves. Finally, both bourbons are married and the final result is a complex blend of both stave finishes, bringing spiced vanilla, baking spices, burnt caramel, and a touch of sweetness on the palate.

The nose is oaky with dried vanilla bean, baking spices, and a touch of cinnamon apple. The palate brings more spiced vanilla, baking spices, burnt caramel, and a hint of sweetness. The finish is smooth with sweet caramel and vanilla, fading into oak and leather.