Learn more
Size750mL Proof108.2 (54.1% ABV)
This Maker’s Mark Wood Finishing Series 2019 is a limited release, aged in a stave profile RC6.
Notify me when this product is back in stock. 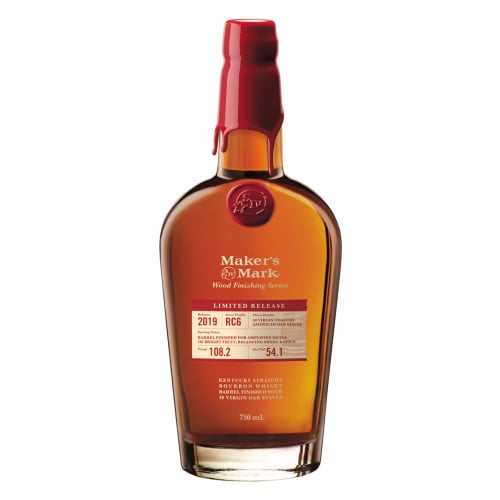 On October 1, 1953, William Samuels Sr. purchased Burks Distillery, which was situated in Loretto, Kentucky, for $35,000. Five years later, the distillery released the first bottles of Maker’s Mark Bourbon Whiskey, which featured the distillery’s distinctive red wax seal. The distillery was listed on the National Register of Historic Places in 1974 and was listed as a National Historic Landmark in 1980.

Made from a mash of corn, wheat, and malted barley, Maker’s Mark Kentucky Straight Bourbon Whiskey (spelled without an “e” to honor the Samuels family’s Scottish heritage) manages to marry large-scale, global production with a rich tradition in a way that few other distilleries can rival. The actual “makers” of Maker’s Mark still rotate the barrels in the distillery’s warehouses, bottle the whiskey and dip the bottles in wax — all by hand.

This Maker’s Mark Wood Finishing Series 2019 is a limited release, aged in a stave profile RC6. Maker’s RC6 is the first release in a collection of Maker’s Mark expressions that employ innovative wood stave-finishing technique to enhance the flavor.

Fruit and sweetness on the nose. The palate is fruity up front, followed by a wave of baking spice and the signature Maker's Mark sweetness coming in at the end. The finish is vibrant and bright with spice and sweetness perfectly balanced for a lingering, light finish.