Learn more
Size750mL Proof109,1 (54.55% ABV) *Please note that the ABV of this bottle may vary
The 4th release in the Maker's Mark Wood Finishing Series might just be the finest yet. Fully-matured cask-strength Maker's Mark serves as the base that gets elevated via finishing with double heat-treated French oak staves.
Notify me when this product is back in stock. 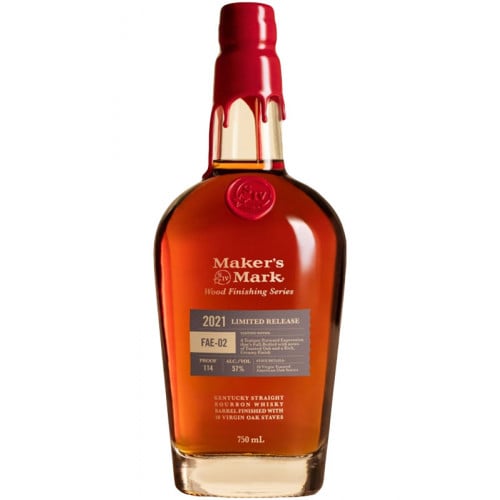 On October 1, 1953, William Samuels Sr. purchased Burks Distillery, which was situated in Loretto, Kentucky, for $35,000. Five years later, the distillery released the first bottles of Maker’s Mark Bourbon Whisky, which featured the distillery’s distinctive red wax seal. The distillery was listed on the National Register of Historic Places in 1974 and was listed as a National Historic Landmark in 1980.

Made from a mash of corn, wheat, and malted barley, Maker’s Mark Kentucky Straight Bourbon Whisky (spelled without an “e” to honor the Samuels family’s Scottish heritage) manages to marry large-scale, global production with a rich tradition in a way that few other distilleries can rival. The actual “makers” of Maker’s Mark still rotate the barrels in the distillery’s warehouses, bottle the whisky and dip the bottles in wax — all by hand.

Maker’s Mark Kentucky Straight Bourbon is special in that red winter wheat serves as the replacement for rye in the recipe. This special holiday release is bottled at a higher 101 proof that gives the profile some additional boldness, richness, and intensity that fans of the original are bound to appreciate.

Their Wood Finishing Series is inspired by Maker's Mark 46. Starting with a fully-matured cask-strength Maker's Mark, they then go on to experiment with staves from the Independent Stave Company, elevating the original expression to new levels. FAE-02 was released in the fall of 2021 after a full year of research. It has already been called the finest in the series. It was finished with double heat-treated French oak staves that bring out delicious caramel and vanilla flavors.

Pick up your bottle of this delicious bourbon today!

The delicious cask-strength bourbon opens with sweet aromas of toasted oak and caramel. The palate is textured with a balance of oak and spice notes, culminating in a long and expertly-balanced finish.