Learn more
Size750mL Proof110.6 (55.3% ABV) *Please note that the ABV of this bottle may vary
A cask strength Maker's Mark is finished in barrels, containing proprietary wood staves. Expect specific flavors of dried fruit, oak, rich caramel, and baking spices, wrapped up on a rich and full-bodied palate.
Notify me when this product is back in stock. 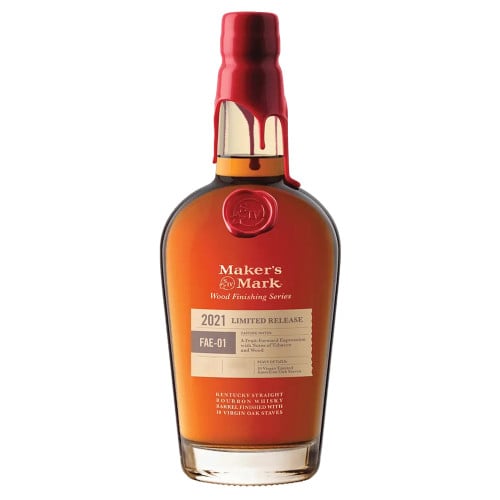 The third release in the limited edition Maker's Mark Wood Finishing Series, Maker's Mark Wood Finishing Series FAE-01 2021 Release starts with a cask strength Maker's Mark, which is then finished in barrels, containing proprietary wood staves. The staves are seared on one side while the other is left raw. Bottled between 110.3 and 110.6 proof, FAE-01 brings specific flavors of dried fruit, oak, rich caramel, milk chocolate, and baking spices on the rich and full-bodied palate.

After the nose greets with citrus and floral aromas, the rich and full-bodied palate brings specific flavors of dried fruit, oak, rich caramel, milk chocolate, and baking spices. The finish is smooth and long-lasting.