Learn more
Size1000mL Proof90 (45% ABV) *Please note that the ABV of this bottle may vary
Made to commemorate American Pharoah’s historic Triple Crown victory in 2015, this bourbon proudly displays the now-legendary blue and yellow livery of Zayat Stables right on the bottle.
Notify me when this product is back in stock.

This product is available in: MO, TX Unfortunately, we can't ship to PO Boxes and APO addresses. 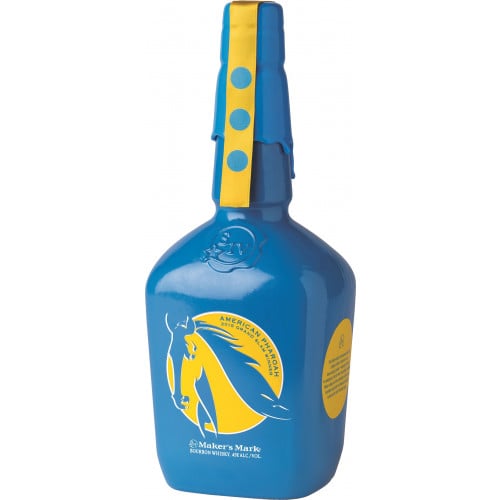 On October 1, 1953, William Samuels Sr. purchased Burks Distillery, which was situated in Loretto, Kentucky, for $35,000. Five years later, the distillery released the first bottles of Maker’s Mark Bourbon Whisky, which featured the distillery’s distinctive red wax seal. The distillery was listed on the National Register of Historic Places in 1974, and was listed as a National Historic Landmark in 1980.

Made from a mash of corn, wheat and malted barley, Maker’s Mark Kentucky Straight Bourbon Whisky (spelled without an “e” to honor the Samuels family’s Scottish heritage) manages to marry large-scale, global production with rich tradition in a way that few other distilleries can rival. The actual “makers” of Maker’s Mark still rotate the barrels in the distillery’s warehouses, bottle the whisky and dip the bottles in wax — all by hand.

“Maker’s Mark has always had a strong connection with horse racing,” says Rob Samuels, chief operating officer of Maker’s Mark Distillery. “Without the support of the thoroughbred industry in the early days of our brand, Maker’s Mark simply wouldn’t exist. We’re honored to help grow the sport we love while also commemorating one of the most remarkable achievements in sports history.

The whisky itself is incredibly smooth. Its aromas of sugar and vanilla lead to a soft palate and long finish filled with woody oak, caramel and fruity essences, making for easy-sipping.

This is a limited edition bourbon, so pick up a bottle today!

Incredibly smooth. Its aromas of sugar and vanilla lead to a soft palate and long finish filled with woody oak, caramel and fruity essences, making for easy-sipping.