Learn more
Size750mL Proof88 (44% ABV) *Please note that the ABV of this bottle may vary
Aged in new Bourbon barrels and used Cognac barrels, Low Gap whiskey was named "Artisan Whiskey of the Year" by Whisky Advocate in 2012.
Notify me when this product is back in stock. 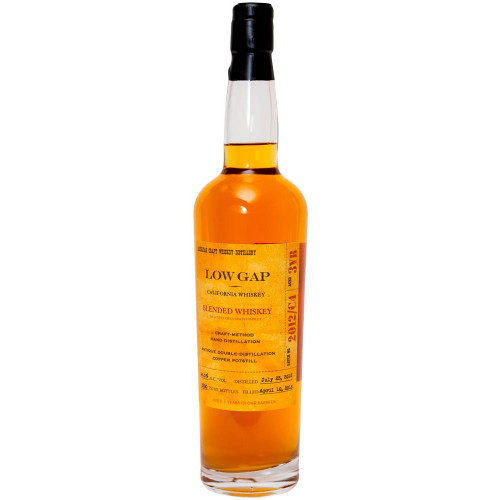 Low Gap Blended Whiskey is crafted from a mash of malted corn and barley — once the mash has been fermented into beer, the resulting wash is twice distilled through Coale's antique, 16-hectoliter (420-gallon) cognac still. After distillation, the whiskey is aged in two different types of barrels: new Bourbon barrels and used Cognac barrels.

After the whiskey has aged for three years, it is brought to proof using rainwater and bottled by hand. The whisky has a semi-sweet aroma, with touches of cornbread, malt, oak and grains. The aroma fades into notes of caramel, vanilla and butterscotch on the palate, and ultimately leads to a finish accented by toast and powdered sugar.

Low Gap earned the title “Artisan Whiskey of the Year” from Whisky Advocate in 2012, and quantities of the brand-new Low Gap Blended Whiskey are extremely limited.

Semi-sweet aroma, with touches of cornbread, malt, oak and grains. The aroma fades into notes of caramel, vanilla and butterscotch on the palate, and ultimately leads to a finish accented by toast and powdered sugar.