Size750mL Proof84.6 (42.3% ABV)
66% of this reposado is aged in French Oak barrels, and 33% is aged in American White Oak, giving the mezcal beautiful oaky overtones.
Notify me when this product is back in stock. 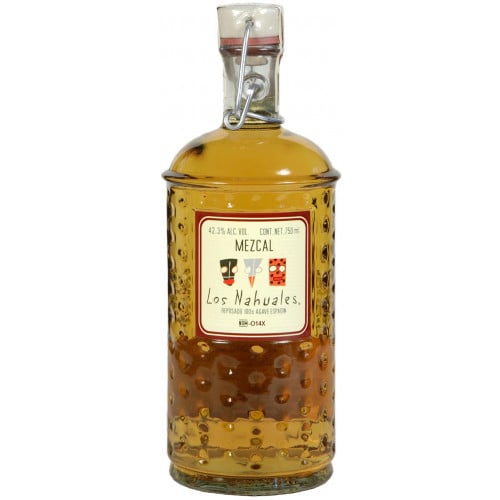 In 1997, the Muñoz siblings acquired a small artisan distillery in Santiago Matatlan, near Oaxaca city, in order to provide their restaurants with a dependable, quality source of mezcal. They hired Hector Vasquez de Abarca in 2004 to oversee the Danzantes distillery. Hector fused tradition and innovation in his methodology, and Karina Abad Rojas- a trained lab chemist- was brought on board in 2009, to oversee the expansion of the distilleries, making Los Danzantes and Alipus Mexico’s top artisan mezcals.

In 2013 Enrique Peña Nieto, President of Mexico, awarded Grupo Los Danzantes with the annual National Quality Award. Los Danzantes/Los Nahuales has been highly regarded as the finest mezcal in production to this day. Los Nahuales is crafted using traditional, highly authentic artisanal methods. After being matured for about 10 years, the agave are roasted in a ground fire pit, above mesquite wood, giving Los Nahules its signature pronounced smoky flavor.

The fermented agave is then distilled along with all of its fibers and solids, infusing the mezcal with a more intense character than that of tequila, which is distilled after filtering out any solids. Mezcals have a more complex vegetal character, rich in the essence of the agave. 66% of this reposado is aged in French Oak barrels, and 33% is aged in American White Oak. After 9 months resting in these barrels, this mezcal is then bottled. This Los Nahuales Mezcal is bursting with flavor, defined by beautiful oak overtones, from their rest in French oak barrels.

The mesquite smokiness becomes focused to something resembling peat in an Islay malt. Elegant, clean, refined, well-structured, with a deep long finish.