Size750mL Proof86 (43% ABV)
This flavored expression is crafted with Litchfield's straight bourbon and arabica beans that are roasted and ground by Baronet Coffee. The spirit is brought down to 86 proof with cold brew coffee instead of water.
Notify me when this product is back in stock. 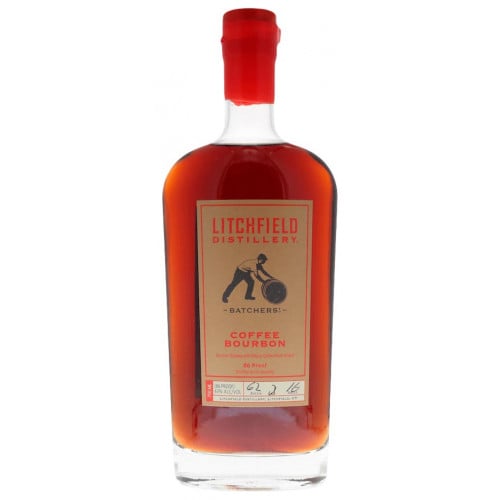 Litchfield Distillery was founded in 2014 by brothers David, Jack, and Peter Baker ― the self-titled "Batchers". They come from a family that has been in the water-bottling business for 3 generations and are the ones behind Crystal Rock bottled water. Based in Connecticut, they had all the experience needed to run a family business, as well as a keen taste for spirits. Seeing the blossoming craft breweries, they decided to jump head-first into distilling. Litchfield Distillery crafts small-batch spirits of exceptional quality using local ingredients. They take pride in their hard-work mentality, unwillingness to compromise, adopting sustainable practices, and taking care of the local community.

The boutique distillery has a range of award-winning craft spirits in its lineup that is overseen by their head distiller James McCoy. The range includes Straight Bourbon Whiskey, Double Barrelled 10YO Bourbon Whiskey, Gin, Vodka, as well as several flavored offerings: Vanilla Bourbon, Maple Bourbon, Cinnamon Bourbon, Apple Vodka, Blueberry Vodka, Peach Vodka, and others. More recently they entered the ready-to-drink canned cocktail market with Spiked Lemonade, The Litchfielder, and Batcherita, all using their in-house spirits and natural flavors.

Their Batchers' Coffee Bourbon is crafted with arabica beans that are roasted and ground to cold brew specifications by Baronet Coffee from Windsor. The ground beans are then steeped in cold distilled water for 24 hours in the same way cold brew coffee is made, before being infused into their in-house bourbon during the proofing. Simply put, the bourbon is cut down to 86 proof using cold brew coffee instead of water. The bitterness is toned down and the result is a smooth and complex flavored whiskey with a distinct earthiness.

The profile takes advantage of the complementing notes of coffee and bourbon. The bitterness of the coffee is restrained, letting the oak and vanilla notes shine. Complex and earthy, it blends the two worlds with panache.