Size750mL Proof60 (30% ABV)
Made by hand using locally-sourced ingredients, each batch of Leopold Bros. Whiskey produces only about 240 bottles.
Notify me when this product is back in stock. 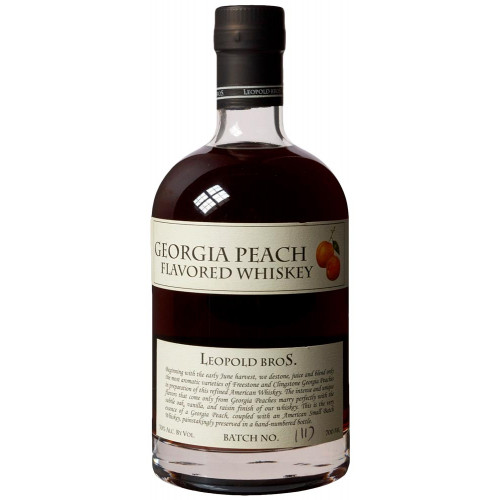 Leopold Bros. George Peach Whiskey is made from ripened freestone and clingstone peaches sourced from Georgia. Clingstone peaches, as their name implies, have a yellow flesh that stubbornly clings to the pits of the peach. Freestone peaches, which are slightly firmer and less juicy than clingstone peaches, have more texture and a slightly milder flavor. After destoning the peaches, "I add a second step to the distilling process," Todd says. "I put the whiskey back into the still with some of the peach stones that were removed prior to juicing — for redistillation. This adds a soft, bitter almond undertone that greatly adds to the peach flavors."

After the whiskey is distilled with the peach stones, Leopold blends it with the peach puree he makes from the Georgia peaches and pours the entire blend into used bourbon barrels. The peach whiskey, which earned a Gold Medal at the Beverage Tasting Institute Competition, has subtle notes of honey and citrus, which complement the flavors of the peach and almonds.

The nose is intense and sweet with notes of peach and almonds. The palate carries the aromas honey and citrus, which are complemented by the subtle oak and vanilla. The finish is oaky with raisin notes.