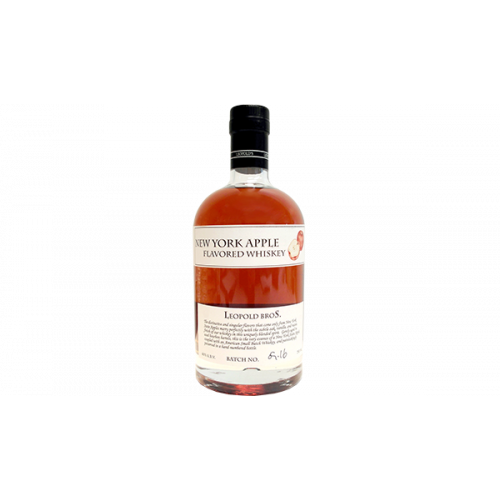 Leopold Bros. New York Apple Whiskey is made from heirloom apples that Leopold sources from the Finger Lakes region in upstate New York. Leopold intentionally uses a wide range of apples, including the rare Maccoun apple (generally regarded at the finest type of apple ever produced), in order to add complexity and flavor to to the whiskey. After the apples have been harvested, they are pressed and their fresh nectar is gently blended with Leopold Bros. Whiskey. Then, the entire blend is re-barreled in used bourbon barrels for additional maturation. "What's great is that the apples oxidize in the barrel, yielding more complex dried fruit, apricot, and raisin flavors that really make the spirit work," says Leopold. The finishing process also adds notes of oak and vanilla to the whiskey, which finishes with a subtle touch of fresh apple.

Leopold Bros. George Peach Whiskey is made from ripened freestone and clingstone peaches sourced from Georgia. Clingstone peaches, as their name implies, have a yellow flesh that stubbornly clings to the pits of the peach. Freestone peaches, which are slightly firmer and less juicy than clingstone peaches, have more texture and a slightly milder flavor. After destoning the peaches, "I add a second step to the distilling process,"Todd says. "I put the whiskey back into the still with some of the peach stones that were removed prior to juicing — for redistillation. This adds a soft, bitter almond undertone that greatly adds to the peach flavors."

After the whiskey is distilled with the peach stones, Leopold blends it with the peach puree he makes from the Georgia peaches and pours the entire blend into used bourbon barrels. The peach whiskey, which earned a Gold Medal at the Beverage Tasting Institute Competition, has subtle notes of honey and citrus, which complement the flavors of the peach and almonds.

"Boy, I had some hand problems at the end of last year,"Todd says, "but it lets people understand that this really is a craft. It's something that hasn't come off an assembly line; it's very much small batch. It's something special."